We know the Honor 30 series smartphones will arrive this month. On April 15, the company will hold an online conference to launch the new-gen flagship handsets. Recently, there were reports that the original model will debut the Kirin 985 pseudo-flagship chip. However, we also know that there will be a higher variant. Today, we got a GeekBench screenshot, showing the benchmark scores of the Honor 30 Pro+. Also, we can see that it will sport the Kirin 990 5G SoC. 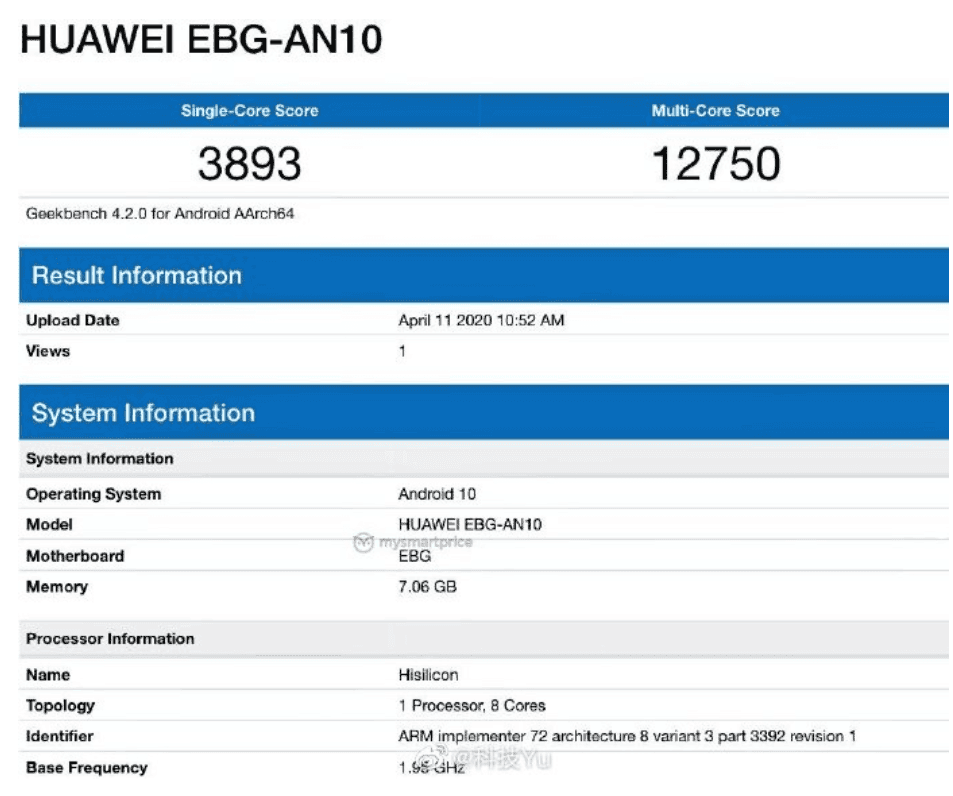 On the Geekbench database, this new model comes with model number of EBG-AN10. The Honor 30 Pro which previously appeared on the database has model number EBG-AN00. Thus, this model is probably the Pro+. In the screenshot, we can the Honor 30 Pro+ has a single-core score of 3893 and its multi-core score is 12750. They are basically in line with the performance of the Kirin 990 5G, similar to Honor V30 performance. The Honor 30 Pro also comes with a similar GeekBench score but the Pro+ model is slightly higher. Furthermore, the model tested by GeekBench comes with 8GB of RAM. It also runs on the Android 10 system.

According to reports, the Honor 30 Pro / Pro+ will use a 6.57-inch BOE / Visionox 90Hz curved OLED screen with a resolution of 2340 x 1080. Although we do not know the actual battery capacity, it will support 27W wireless fast charging and have stereo speakers. This smartphone will also support a 40W super-fast charging using a wire. Furthermore, the Honor 30 series will use a full-band high-amplitude dual-speaker configuration. It will support smart sound effects and game listening mode.

Well, seems we have figured out what chips will be under the hood. However, this series is also known for another feature. The phones should come with a new Sony customized outsole sensor, reaching 1/1.3 inches, with a single-pixel area of ​​1.2μm. This is the largest in the industry.

Next 8K video on smartphones is a marketing gimmick

Honor 30 and 30 Pro get a new Streamer Mirror colorway