A roadmap has appeared on the Web demonstrating the products that will be produced by TSMC using the 5-nanometer process technology. The release of small batches starts already this year. The first solutions will be the Apple A14 / A14X and Huawei Kirin 1000 for smartphones. But next year, large-scale production of CPU, SoC and GPU will be launched according to the 5 nm N5 manufacturing process. 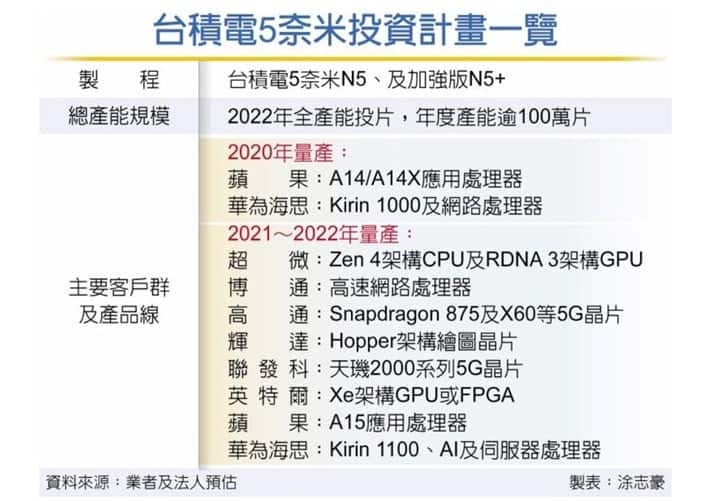 According to the roadmap, next year, there will be at least four SoC for smartphones using the 5 nm process technology: Qualcomm Snapdragon 875 with built-in 5G Snapdragon X60 modem, Apple A15, Kirin 1100 for Huawei and MediaTek Dimensity 2000. Among the desktop, processors will be an AMD CPU based on Zen 4 architecture. But the list of graphic cards looks much more interesting. It features AMD models on RDNA 3, Nvidia GPUs based on Hopper architecture, and even 5nm discrete Intel Xe GPUs!

Analysts expect TSMC’s revenue from 5nm production to reach 10% of the total this year, and next year it will rise to 25-30%. After the 5 nm N5 process technology, the company will switch to a more advanced 5 nm N5+. This will happen in 2022.

Everything seems to indicate that the Taiwanese company will take advantage of its advance on engraving in 5 nm, in terms of yields and production capacities, to capture a maximum of customers, as it has already done on 7 nm, to the detriment of Samsung which can always recover part of the orders but rather as an alternative supplier.

According to the latest reports, the Trump administration is in talks with chipmakers, including Intel and TSMC, to build factories in the US. This move will help the US to reduce its dependence on Asian imports. Furthermore, reports claim that some officials in the US government are also trying to draft in Samsung. They are helping Samsung Electronics to expand its U.S. market by producing more advanced chips in the U.S.

Next CHUWI HeroBook Pro is still the great value laptop