Today, popular market research company, Canalys released it’s latest forecast for the global PC market. According to the company, due to the coronavirus pandemic, global PC (including tablet) shipments will decline by 7% in 2020. Canalys also expects that the global PC shipments to remain stable in 2021 and return to a 2% growth in 2022. 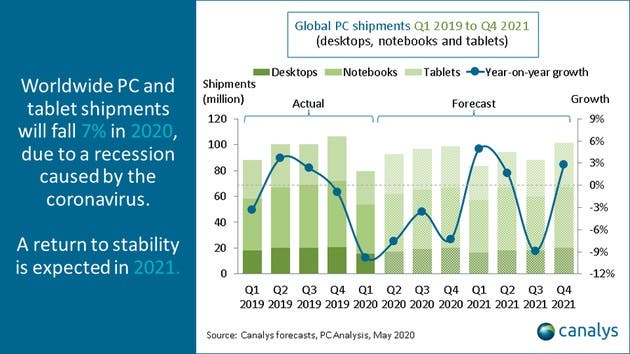 As you can see from the chart above, PC shipments fell by about 9% during the first quarter of this year. Canalys predicts that there will be a slight increase in the second and third quarters. However, it is expected that shipments will still decline year-on-year. As for the reason, of course, it is due to the inevitable economic recession caused by the epidemic. This will make consumers or companies carefully consider whether to upgrade and replace the products in their hands.

Global PC shipments will rebound in 2021

However, Canalys believes that the worst period has passed. Although the decline in shipments is the general trend, Canalys expects the decline in the second, third, and fourth quarters of this year to be smaller than the first quarter. In addition, China’s resumption of production and restoration of production resumed normal PC supply chain. Furthermore, the increase in demand for remote office and online courses will offset some of the negative effects.

Among them, notebook computers are undoubtedly the growth engine of the PC industry. It is the first choice for remote office and online courses, but this will further squeeze the living space of desktop computers and tablet computers.

Specifically for the Chinese market, Canalys predicts that PC and tablet shipments will decline by 3% in 2020. Canalys also expects that demand growth in the first quarter of 2020 will lead to a substantial increase in sales in the second quarter of 2020, and will eventually achieve a 4% increase in 2021.

These are the predictions of Canalys for this year. Nevertheless, there could be a significant deviation from what the company expects. Market trends can quickly change and the market could boom much more than the initial anticipation. Do you think the global PC market will see a decline? Will it play out just as Canalys predicts? Let us know your thoughts in the comment section below

Next Remove China Apps: Google removes the controversial app from the store