The YouTuber EverythingApplePro has published photos in which the younger model of the iPhone 12 line is compared in size to the new iPhone SE. More precisely, they compare the iPhone 12 model printed on a 3D printer with the real iPhone SE smartphone.

People who love tiny phones are in for a treat with the new 5.4-in iPhone. Smaller than a new SE! pic.twitter.com/cTSH2LBzKA

Recall, the screen of the iPhone SE has a diagonal of 4 inches. Judging by the photos, the 5.4-inch iPhone 12 will be smaller than the 4-inch iPhone SE.

It is expected that the small version of the iPhone 12 will be equipped with an OLED screen, the new 5-nanometer Apple A14 single-chip system, at least 128 GB of flash memory, and support for only 4G, while it should cost the same as last year’s iPhone 11 with 64 GB of memory. 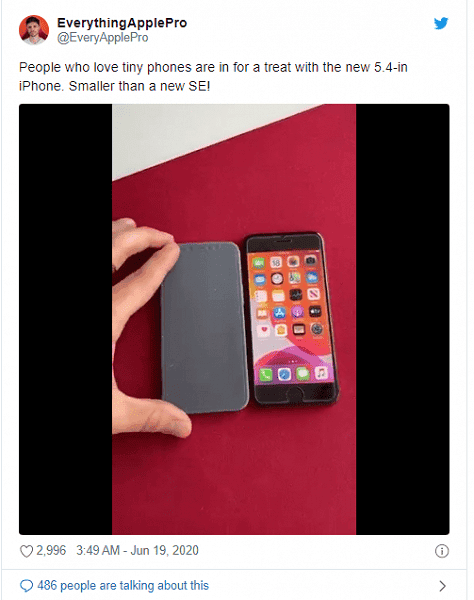 A reliable informant also said that the Apple iPhone 12 Pro and 12 Pro Max smartphones will indeed receive screens with a refresh rate of 120 Hz. In addition, yesterday, it became known that Apple could rename the iPhone to Apple Phone and iOS to iPhoneOS.

Apple may rename iOS to iPhoneOS and iPhone to Apple Phone

Back in the last year, Apple revealed iPadOS. Instead of providing a new iOS version for its iPad lineup, the company created a separate branch of its software focused on tablets – iPadOS. Apple Watch already has WatchOS, Mac has macOS, and now, a leak points out that Apple will rebrand its mobile operating system to iPhoneOS. Like it or not, you have to agree that this change makes perfect sense. Apple wants to have the image of its software versions directly associated with the product they are respectively focused on.

The info comes from a reliable leakster, Jon Prosser. He is very familiar with Apple-related information. Moreover, Max Weinbach of XDA-Developer further endorsed the reliability of this news. According to Weinbach, he received a mail stating that Apple will rename iOS to iPhoneOS. The XDA-Developer stated that the email even mentioned that the iPhone will be renamed Apple Phone. Okay, this is a big change, and we’re not sure about that. After all those years, would Apple rename its smartphone to Apple Phone? I think most customers will keep calling it iPhone, no matter what Apple says. So in the end, a change of this kind doesn’t make big sense.