The Honor brand (owned by the Chinese giant Huawei) has published a teaser image anticipating the imminent announcement of a new mid-range smartphone – the Honor Play 4e model.

The device is equipped with a 6.39-inch display. In the upper left corner of this panel, there is a small hole for a single front camera. Screen resolution is not specified; probably it has an HD+ or Full HD.

At the back, you can see a triple camera with sensors arranged in a row vertically. This system includes a 13-megapixel sensor. The smartphone is shown in the image with a gradient color.

At the heart of the device is a proprietary Kirin 710A processor (eight processing cores and an ARM Mali-G51 MP4 graphic processing unit). The amount of RAM is 4 GB, the capacity of a flash drive is 128 GB. It is also known that power is provided by a 4000 mAh battery. 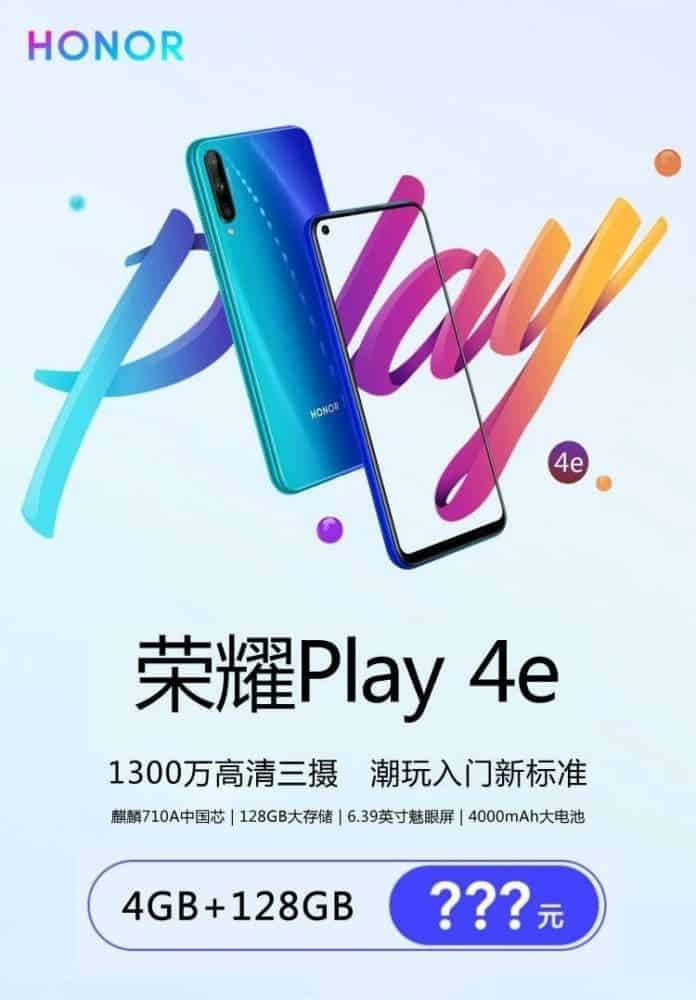 Apparently, the official presentation of the Honor Play 4e will be held soon. Unfortunately, the price has not yet been disclosed.

In the first quarter of this year, according to Gartner, shipments of smartphones year on year fell by 20.2% – up to 299.1 million units. Huawei is in second place (after Samsung) in the ranking of leading manufacturers with 14.2% of the market.

Smartphone sales declined in Q1 2020 due to COVID-19 pandemic

The COVID-19 pandemic is certainly impacting the global economy. However, analysts are beginning to speculate that the worst phase has passed considered that several countries are beginning to resume economic activities. We can see that several sectors accumulated losses during the past months, among them, we have the smartphone market. First, it suffered from delays in the supply chain, now it’s being impacted with the low demand. According to the European market research done by Counterpoint, the COVID-19 pandemic has caused a 7% market decline in Q1 2020 compared to Q1 2019. Also, it caused a 23% decline if we compare Q1 results with Q4 2019. Western Europe took the bigger hit with 9% on average while Easter Europe experienced about a 5% fall.

Moreover, the pandemic is making some customers adapt their update cycles. Most of them, now believe that 2020 isn’t the right year to upgrade a smartphone. Italy, for instance, took the biggest hit with a 21% decline compared to last year’s Q1. If we recall, the country also was one of the most affected by the pandemic. The report states that online retailers were able to offset the negative impact with more aggressive online sales schemes. The offline stores, in counterpart, had suffered a huge impact due to the lockdown policies. Interestingly enough, the Russian market has seen a small 1% decline as it was barely affected by the time the quarter ended.

Next Snapdragon 865 Plus likely to launch next month