After several rumors and leaks, Microsoft announced its dual-screen device called Surface Duo. The device was announced last Fall with an expected launch around this year’s holiday season. Recent rumors pointed that Microsoft is planning to anticipate the launch of its dual-screen device. During the past weeks we’ve been getting a lot of details about the Duo, the new report comes to give more fresh air for those who can’t wait for the new handset.

The latest bit doesn’t involve the Microsoft Surface Duo’s hardware. Instead, we’ll get an insight into a specific feature in the software. Microsoft wants to make better use of the two displays, and for that reason, it is shipping a feature called “app groups”. This feature will allow the user to create a pair of apps that you often use simultaneously and a shortcut to them on the home screen to open both at once. That feature is present among Samsung devices and it’s called App Pairs. Sony also does the same, however, it’s better when you have two screens to separate each app. Although LG already has some “dual-screen” devices thanks to the screen cover, Microsoft will still be the first company to implement this on a dual-screen device. 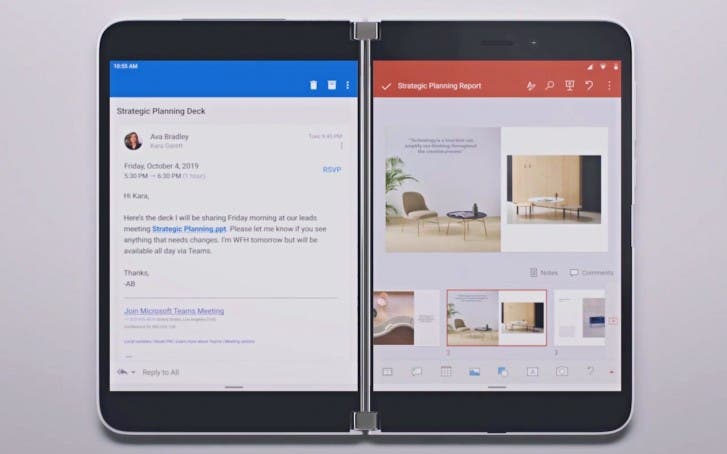 The Surface Duo is a device featuring two screens on two equal sides. There is a 360-degree hinge between them. So while neither display panel is foldable, that hinge will give plenty of use case flexibility. The device will be just 4.8mm thin when opened and thus 9.6mm thick when shut. A bunch of specifications of the device has been leaked already.

As we said before, both displays will be identical here – 5.6-inch AMOLED panels with 1800×1350 pixels of resolution. Under the hood, we’ll have the Snapdragon 855 from last year. Yeah, we know that this is an odd choice, especially when we take in consideration that devices that arrive on market with yesterday’s flagship SoC have never done well, sales-wise. However, the reason behind this choice has to do with the fact that Microsoft had finalized the Surface Duo’s internal design way before the Snapdragon 865 was a thing. Moreover, there’s simply no room inside for the X55 5G modem – It’s mandatory for companies using the 865 platforms.

According to recent rumors, Microsoft might be aiming at a July launch for the new device. However, we still need to wait for confirmation.
Source/VIA :
Windows Latest

Next Facebook introduces dark mode for mobile, users reported all acrose the globe!