Vivo’s sub-brand iQOO surprised everyone by launching a first-ever smartphone powered by Mediatek’s Dimensity 1000+ SoC with the iQoo Z1. Following this,  various leaks indicated a watered-down variant Z1x could be in the works. And now, a recent listing on TENAA has revealed key specifications of the device.

Is it a toned-down version of iQOO Z1?

The listing on TENAA shows a device listed with the model number V2012A. This goes in line with the previous leak which had the same model number, a few days back.

While there is no evidence to back the claim if the model number will be under the iQoo branding, we can recall a tip from China. It stated that iQoo Z1x will have a 6.57-inch LCD display. The same has reflected on the TENAA listing solidifying claims. Other than this, we can expect the display to be FHD+ and sport a 120Hz refresh rate screen.

Further, the device with the same model number seems to have a battery capacity of 4,880mAh battery. This further ascertains the earlier claims that the device will have a 5,000mAh battery. 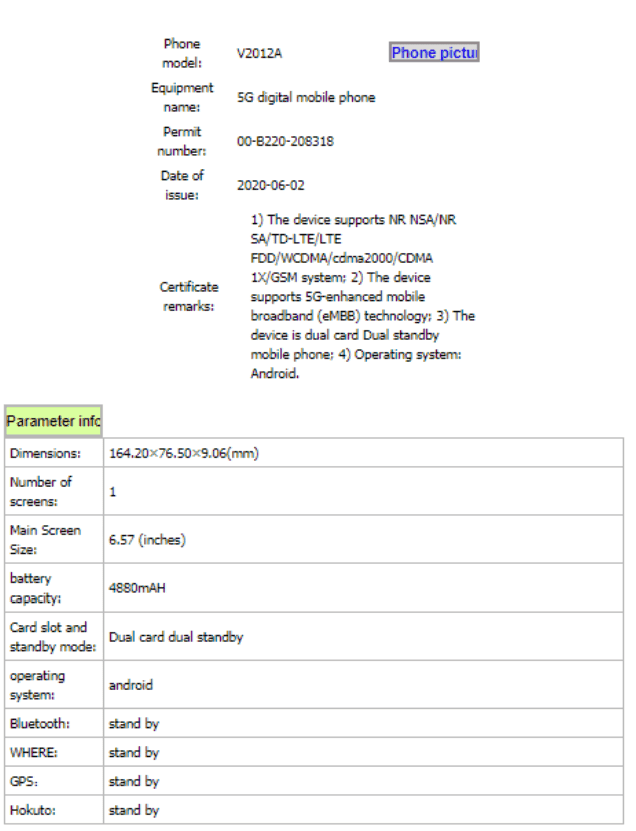 Apart from this, the database says the Android device will be 5G-ready and support both SA/NSA. In addition there are LTE and WCDMA bands obviously. The device will also have Dual SIM functionality with support for eMBB for faster connectivity and wider coverage.

Measuring in at 164.20 x 76.5 x 9.06mm, the device seems to be slightly bigger than the Z1 which is understandable considering a typical 380mAh increase in battery size.

The iQoo Z1x’s specifications have already been leaked. The device is likely to be powered by Snapdragon 765G 5G SoC and paired with 6/8GB of RAM and 128GB of internal storage.

Earlier entries on China’s 3C certification authority also revealed that the device with the same model number will have support for 33W fast charging. This seems plausible as the higher sibling iQoo Z1 has slightly higher 44W charging.

While the other details are not known as of yet, the price, however, is rumored to be very competitive starting at CNY1398(~$200). The device is rumoured to be unveiled on July 2nd and let’s see what iQoo has in store for us this time.