Back in May this year, Honor announced the MagiBook Pro laptop with outstanding hardware and performance. So it was logical to see this laptop captures unexpected market share in a short period of time. In other words, in China, where the Xiaomi laptops are the sole leaders, Honor could make a tough competition. So we can even say the competition in the smartphone market has been transferred to the notebook field. But as you know, recently, Redmi released the Ryzen version of its much-popular RedmiBook. So, in order to continue fighting against Xiaomi, Honor has decided to do the same. The launch date of the Honor MagicBook AMD version is set to be on July 16. And as there are a few days left before the official launch, we will get more and more news from the manufacturer. Say, today, we learned about its charging power. 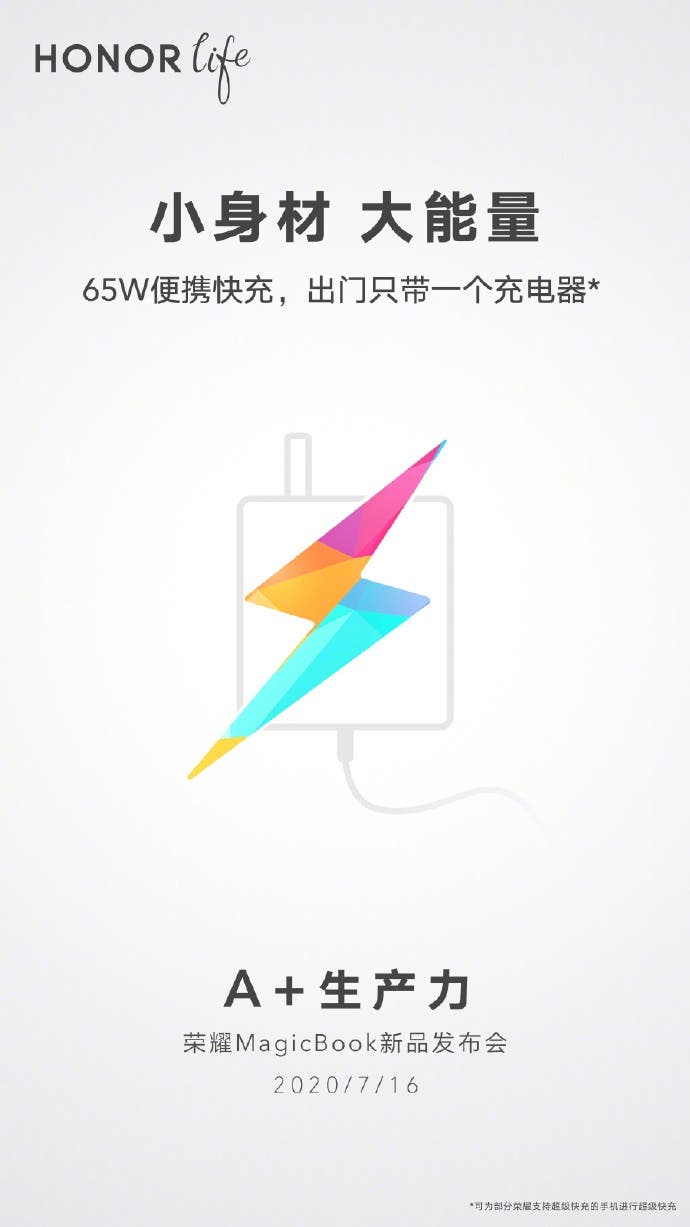 According to the company’s official poster, the Honor MagicBook AMD version will come with a 65W super-fast charging adapter. And as the company claims, due to this accessory, the laptop will charge about 50% in 30 minutes.

Until yesterday, what we have heard were just rumors. But both parties have decided to flirt publicly. Each of the companies said ‘Hi’ on the windows of their offices. This was a clear sign that Honor is going to release an AMD-powered laptop.

Anyways, as for the certain hardware features, the Honor MagicBook AMD version is rumored to sport the company’s brand new 7nm Ryzen 4000-series CPUs. The new chip series promises a significant bump in terms of performance as well as power-saving.

Over the past few years, Ryzen chipsets helped AMD to see the rise of several OEMs who have bet on this chipset lineup. The Ryzen lineup promises great power and efficiency at affordable prices. With the use of the Ryzen 3000 series, Honor saw a great increase in sales of its MagicBook lineup. For that reason, it makes perfect sense to make use of the newer and better Ryzen 4000 chips.

Of course, the initial launch will happen only in China. However, the new MagicBooks should reach other countries in the coming months. According to recent rumors, the company even has plans of releasing a new gaming laptop to take a ride on this trend.

Previous Apple Wants You To Remove Webcam Cover On MacBook