Huawei always launches the second flagship model in the second half of the year. And as you know, it always comes our way from the Mate series. This year, there will be no exceptions. The Huawei Mate 40 is in works and will come on time. And now, we can talk about its selling points because this amazing handset has been leaked, showing its entire arsenal. It turns out, apart from the regular variant, there will be the Pro version as well.

According to reports, the Huawei Mate 40 will come with a 1080P OLED full screen with a refresh rate of 90Hz. The Pro version uses a 90° OLED waterfall screen with a refresh rate of 90Hz. In terms of processors, both phones will sport a 5nm process Kirin 1020 5G chip. The phones will sport a front-facing dual-camera. But if the Mate 40 uses a 24MP fixed-focus selfie lens, the Pro version comes with a 32MP autofocus camera. Both phones have bangs. But the bangs of the latter are smaller. 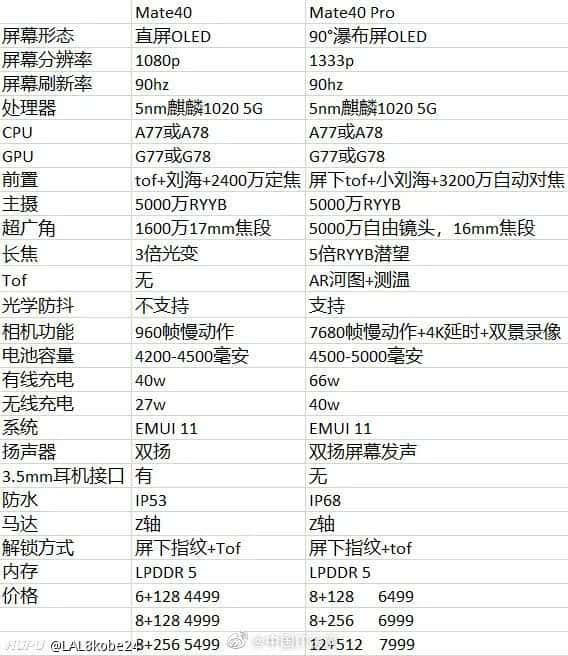 In terms of rear cameras, the Huawei Mate 40 features a triple-camera. It consists of a 50-megapixel RYYB main sensor, a 16-megapixel 17mm focal length ultra-wide-angle lens, and a 3x optical zoom lens. At the same time, the Pro version has four cameras. In addition to the 50-megapixel main camera, it also includes a 50-megapixel free lens, a 5x periscope telephoto lens, and a ToF lens. They have the function of temperature measurement.

Note: The Honor Play 4 Pro is the first with the function of temperature measurement.