Huawei’s Mate line always comes in the second half of the year. Thus, if the P series is considered to be the first-half flagship, the Mate series boosts sales in the second half. In other words, the P40 models have done their job. And Huawei fans (and not only) are waiting for the Mate 40 smartphones. Honestly, we have heard too much about this handset. And most of the rumors and leaks referred to the screen material and suppliers. This time, we have got other information that claims the Huawei Mate 40 Pro will use a ‘bangs screen’ design in order to support face recognition.

Bangs Screen Is Still In Fashion

The source has previously reported that the Mate 40 series will continue the screen specifications of the P40 series. In other words, it will come with a 1200P+ resolution and a 90Hz refresh rate. By the way, at the same time, it informed the smartwatch called the Mate Watch running Harmony OS will also be released together with the Mate 40 series. 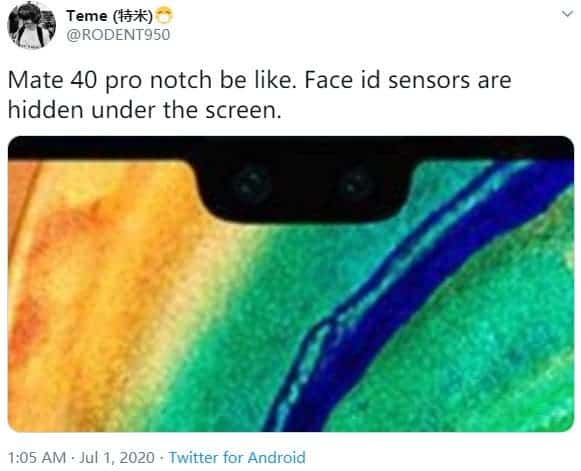 Though there has been no official confirmation concerning the processor, there is every reason to think the Huawei Mate 40 series will debut the Kirin 1020 flagship chip. In fact, Huawei announces a new flagship SoC every fall. So this time, it shouldn’t change the schedule.

Other Features Of Huawei Mate 40 Pro

According to the previous leaks, the Kirin 1020 will use the ARM Cortex-A78 architecture. Thanks to the 5nm process, the Kirin 1020 can accommodate 171.3 million transistors per square millimeter, and its performance should be 50% higher than that of the Kirin 990.

Well, let’s get back to the screen of the Huawei Mate 40 Pro. Not that long ago, we reported that the Huawei Mate 40 Pro will receive an Ultra-Thin Display (UTD), designed specifically for models with a flexible or curved screen. These words can be considered confirmation that the phone’s screen will also be curved.

Previous iPhone SE 2 Plus, iPhone SE 3 are coming one after another? is it possible?