Samsung is currently gearing up for its next iteration of flagship tablets dubbed Galaxy Tab S7 lineup. As you might already know, the lineup will consist of two offerings namely Galaxy Tab S7 and Tab S7 Plus. Apart from flagship tabs, it looks like Samsung is now working on an affordable tablet as well. A new Samsung tablet has now appeared on GeekBench listing, revealing some key specs along the way. 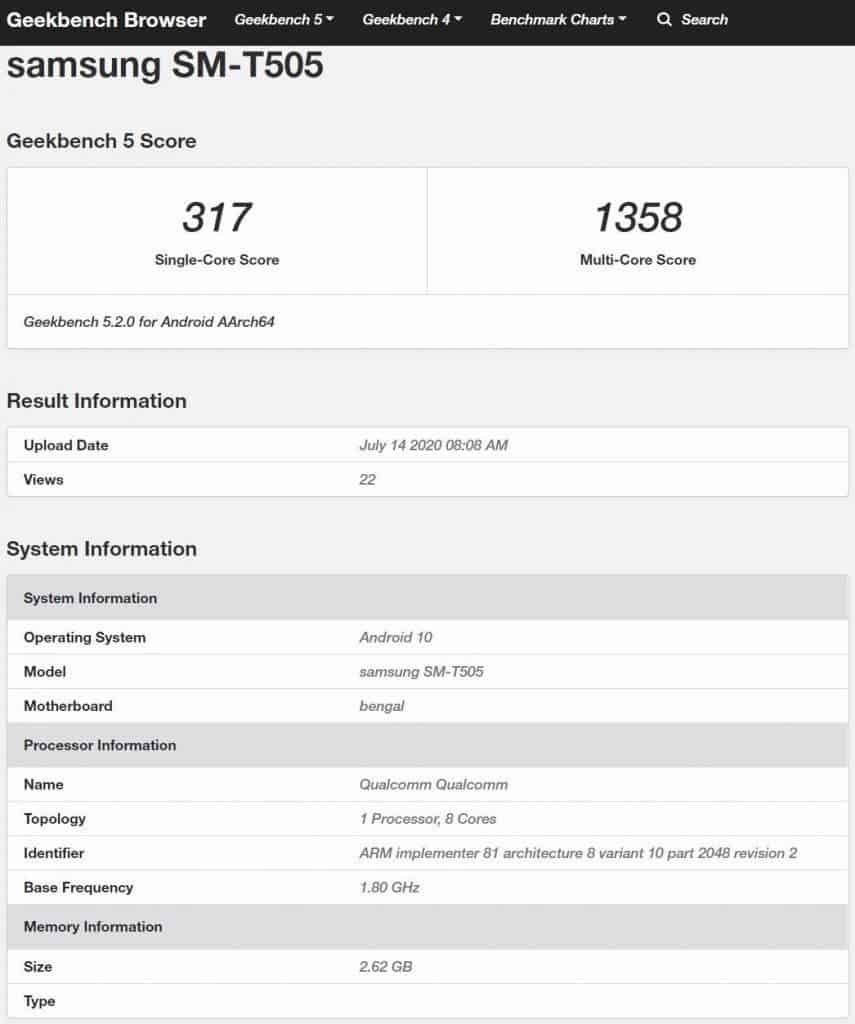 A new Samsung tablet with the model number SM-T5050 has now surfaced on GeekBench for benchmarking tests. As per the listing, the tablet will arrive with a Qualcomm chipset with a base frequency of 1.80GHz. Sadly, there is no mention of the official moniker for the processor. Although the listing does mention the codename ‘Benga’ for the SoC.

For those who’re unaware, the Snapdragon 662 is manufactured over the 11nm fabrication process. The chipset can support up to 192MP camera sensor. Other features that it supports are LPDDR4X RAM, Bluetooth 5.1, Type-C, Quick Charge 3.0 along with X11 LTE modem. Apart from the chipset, the tablet will also arrive with Android 10 operating system and 3GB of RAM. Coming to the benchmarking scores, we’re looking at 317 points for single-core and 1358 in multi-core performance.

Apart from this, the listing doesn’t really talk about anything else. With that said, we might see some more information surfacing on the web soon.

If we go by the model number, then it looks like the affordable Samsung tablet could arrive as Galaxy Tab A 7.0 (2020). A couple of months ago, Samsung launched its Galaxy Tab A 8.2 (2020) in the United States for a price tag of $279. The original Tab A 7.0 was launched way back in 2018 so the brand might be thinking of launching a 2020 version as well. What’s the final moniker is going to be? Well, only time will tell that.

Previous OnePlus Nord is up for pre-orders in several countries