For the last couple of years, HTC was struggling to compete with the likes of Samsung, Apple, and OnePlus. Due to the aggressive market, the company stopped launching new devices for quite some time. Last month, the brand re-entered the business by launching its first 5G phone dubbed HTC U20 5G along with Desire 20 Pro. Well, it looks like the brand is now working on yet another smartphone, and this time we’re looking at HTC Wildfire E2. 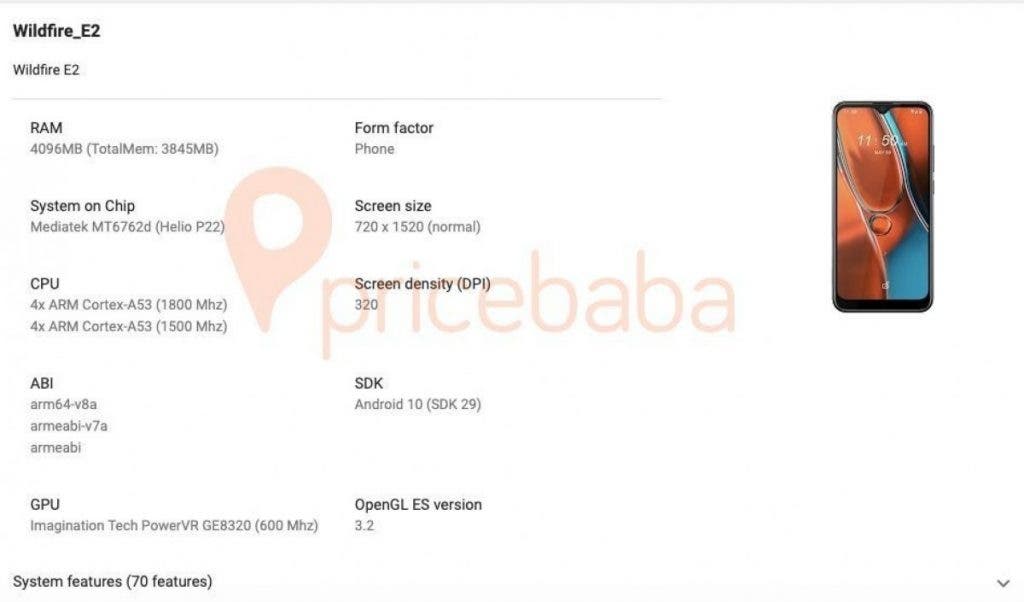 HTC Wildfire E2 is going to be an entry-level smartphone from the Taiwanese company. It has now appeared on the Google Play Console listing revealing some key specs along the way. As per the listing, the smartphone will arrive with a 6.2-inch display with 720 x 1520 pixels resolution. The device is powered by Helio P22 chipset paired with 4GB RAM and 64GB onboard memory. The SoC comes with eight Cortex-A53 cores out of which four of them are clocked at 1800MHz and the remaining four at 1500MHz.

It will make use of the latest Android 10 operating system and a rear fingerprint sensor. Apart from this, the listing hasn’t revealed anything about the internals. Just like with other Play Console listing, we also have a front design of the device. The display comes with waterdrop notch housing the front selfie camera. Sady, there is no design reveal for the rear of the device.

It seems like HTC will slowly launch multiple devices over the course of this year trying to put its foot back in the market. With that said, we are expecting more information to come forward in the coming months. Whenever that happens, we will make sure to keep our readers update.

To recall, HTC’s first 5G smartphone dubbed U20 5G comes with a 6.8-inch display with a resolution of 1080 x 2400 pixels and 387 PPI pixel density. The smartphone runs on Snapdragon 765G chipset paired with 8GB RAM and 256GB onboard memory. For graphics, the device makes use of Adreno 630 GPU. In terms of optics, the device comes with a quad rear camera module featuring 48MP primary sensor, 8MP ultrawide lens, 2MP macro, and 2MP depth lens.

For selfies and video calling, there is a 32MP front shooter housed inside the notch. All of these run on 5,000 mAh battery with 18W fast charging support. It runs on the Android 10 operating system as well.