According to nokiamob, HMD Global will release three new mid-to-low-end models at IFA 2020 this year. Those models are going to be the Nokia 2.4, Nokia 6.3, and Nokia 7.3.

The source also said that the Nokia 2.4 will be equipped with an octa-core MediaTek Helio P22 processor. It is code-named Wolverine. We also know that the phone will use a 6.5-inch 720P + screen. On the back, it will have a 13MP + 2MP dual-camera, while for selfies, there is a 5MP lens. Under the hood, there is a 4500mAh battery. And the phone will offer a few storage options of 2/32GB and 3/64GB. 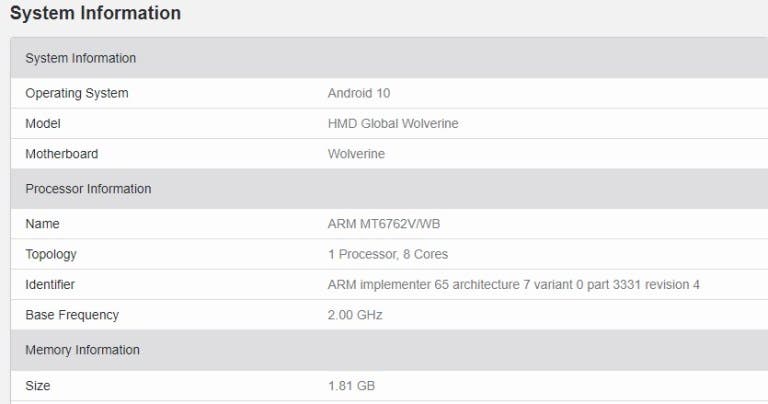 This handset has already managed to appear on GeekBench. Looking at the GeekBench listing, the processor of this device is ARM MT6762V/WB, which is the Helio P22 processor. Relative to the quad-core Helio A22 processor on Nokia 2.3, the octa-core Helio P22 processor is 1.97 times faster. According to the listing, this smartphone will arrive with only 2GB of RAM. As for its internal storage, there is no information for now. Nevertheless, with 2GB of RAM, the storage should be 16GB or 32GB. This is an entry-level smartphone and its GeekBench single-core test hit 136 points while the multi-core test score is 497 points. With its appearance on GeekBench, this smartphone will probably arrive soon.

According to NokiaPowerUser, the Nokia 6.3 and the Nokia 7.3 have passed the certification. The Nokia 6.3 should come with a Qualcomm Snapdragon 670/675 processor and a rear quad-camera by Zeiss.

The Nokia 7.3 may sport a Qualcomm 700 series SoC and a rear quad-camera. It should have to versions supporting 4G and 5G.

These devices are now available on a Canadian Radio Equipment database. To be precise, the TA-1277 versions of the Nokia 6.3, Nokia 7.3, and Nokia 2.4 have been spotted on a Canadian certification site.

The Berlin International Consumer Electronics Exhibition originated in 1924 and is one of the largest consumer electronics exhibitions in the world. Due to the epidemic this year, the organizers announced that the IFA 2020 exhibition will be held from September 3rd to 5th, and the duration will be shortened to three days. It will happen mainly through online live broadcast and not to be open to the public.