Counterpoint Research recently published research data. The new coronavirus pandemic has a severe impact on economic activities and shipments of high-end models in the Indian smartphone market in the second quarter of this year. Although there are more than 1 million units shipped, it has dropped by 32% compared with the same period last year. By the way, high-end models refer to smartphones priced above 30,000 rupees (approximately $399).

The analysis and consulting firm Counterpoint Research said in a research report that India’s nationwide lockdown for nearly 40 days due to the new coronavirus epidemic caused almost zero shipments of high-end smartphones in India in April. This is the largest contribution to the sharp decline in shipments in the second quarter. 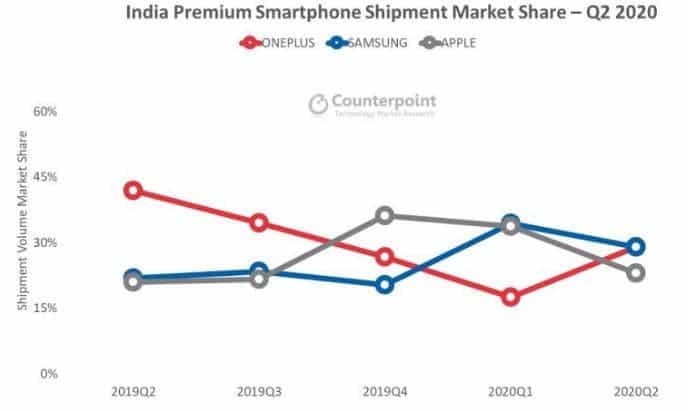 The analysis consulting firm also stated, ‘Still, it was one of the least affected segments and reached its highest ever share in the overall India smartphone market, contributing more than 4% in total smartphone shipments.’

Prior to this and after the lockdown, OnePlus’ newly launched 5G version of the OnePlus 8 series and other high-end models, as well as the re-entered Apple models, have maintained a good market performance in the Indian high-end smartphone market.

In addition, in the Indian smartphone market in the second quarter, we also saw more vendors working on high-end models in order to increase profitability and increase brand awareness in this market.

The Counterpoint Research report stated that 5G has become a standard for high-end smartphones. Samsung Electronics and Apple will soon launch their own 5G smartphones in the Indian market.

The research report stated, ‘India’s premium smartphone market is shaping up as OEMs are now changing their strategies to target consumers in all price tiers. Xiaomi, OPPO and Vivo entered the ultra-premium segment with their 5G flagships Mi 10, Find X2 and X50 pro, respectively. The segment no longer remains an oligopoly of Samsung, Apple, and OnePlus.’

For example, in the quarter, the VIVO V19 was launched. And immediately it ranked second in the high-end smartphone market of India.