Nokia Mobiles are all set to launch their budget smartphone mainly the Nokia C3 in India very soon. Folks over at NokiaPowerUser have come across an India-centric poster for the upcoming device which reveals a few key information about the device indicating that the device will come with a 1-year replacement guarantee. The poster also highlights some of the key features of the phone. Take a look at the poster below.

Nokia had recently launched the Nokia C3 in China. The C3 is a budget-friendly smartphone powered by an entry-level processor (which Nokia hasn’t revealed yet), and sports a modern design. In China, it is offered in a single storage and RAM variant; which is likely to be the case in India as well. The smartphone sells for CNY 699 (in China), which translates to Rs 7,500 for the Indian market. If the phone does, indeed, launch for that price in the country; we do not expect too many takers for it considering other options out there from Xiaomi and Realme. 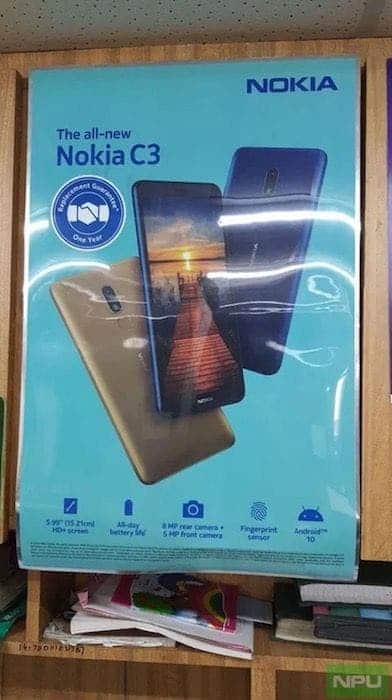 The Nokia C3 features a  5,99-inch HD+ display that boasts 400 nits of peak brightness. The processor is believed to be an entry-level Soc manufactured by Unisoc There is a single 8MP camera at the rear with an f/2.0 lens and a 5MP front-facing camera with an f/2.4 lens for selfies on the Nokia C3.

In China, the phone comes in a single 3GB+32GB version with the option to expand the storage further using microSD cards. The phone packs in a 3040 mAh battery and ships with a 5W charger in the box.  The brand claims up to 31 hours of audio and up to 7 hours of video playback on the Nokia C3. The handset also comes with a lot of connectivity features that include Wi-Fi 802.11 b/g/n, 4G, Bluetooth v4.2, GPS/ A-GPS, a 3.5mm headphone jack, and a Micro-USB port. There is a rear-mounted fingerprint scanner as well for additional security.

As of now, there is no evidence as to when we can expect Nokia to officially announce the Nokia C3 for the Indian market.

The Nokia C2 boasts a 5.7-inch IPS display with HD+ resolution and an 18:9 aspect ratio. Under the hood, the device carriers a 1.4GHz Quad-Core CPU which is a slight upgrade over Nokia C1’s 1.3GHz. The processing power is aided by 1GB of RAM which is enough for running apps but makes the concept of multi-tasking inexistent here. It carriers 16GB of storage which is expandable to 64GB via microSD slot.

On the back, there’s a 5MP with f/2.2 aperture along with a LED flash. Moving around to the front, we have another 5MP snapper for modest selfies and video-calls. The handset draws power from a modest 2,800mAh battery that can charge at 5W via a micro-USB port. Additionally, the handset has an FM radio receiver and a 3.5 mm audio jack. The Nokia C2 comes in Black and Cyan colours.

As we said before, the Android GO is based on Android Pie and you shouldn’t hold your breath for an Android 10 update. The device comes with all the GO variations of Google Apps.

Next Last chance for a launch discount on the ELEPHONE U5