Over the past few months, there have been ups and downs in the smartphone market due to the coronavirus pandemic. However, millions of smartphones still hit the market every quarter and sales are still moving. According to the latest smartphone market report by Counterpoint Research, a global market analysis organization, Oppo once again became the number one brand in Southeast Asia. The Chinese manufacturer hit a 20.3% market share in the second quarter of 2020. 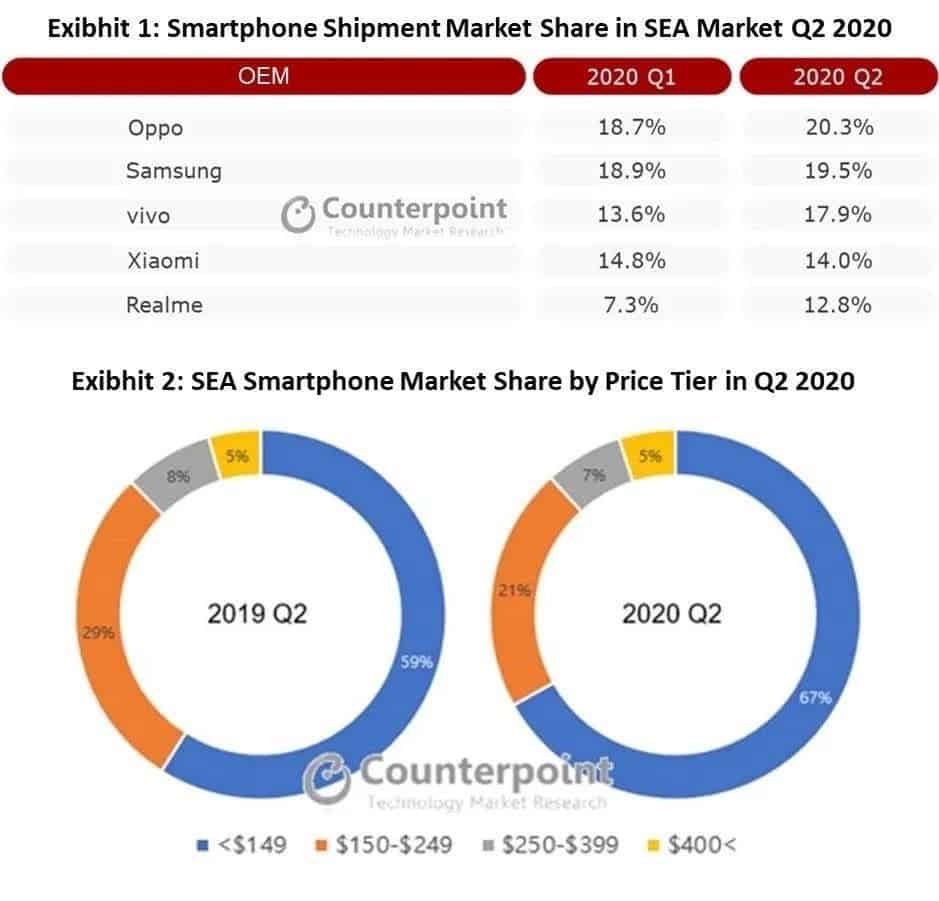 The research report shows that due to the pandemic, the total sales of smartphones in Southeast Asia fell to 24 million in the second quarter of 2020.  Among the top 5 manufacturers, Oppo’s 20.3% is only 0.8% higher than Samsung’s 19.5% market share.

There has been a battle between Oppo and Samsung in the Southeast Asian market. In the fourth quarter of 2019, Oppo hit the first position but it didn’t last long. In the first quarter of this year, Samsung toppled Oppo again by taking the top spot with just 0.2%. Now, Oppo is on top of Samsung again with only 0.8%.

With Realme, Oppo is unmatchable

It is worth noting that OPPO’s sub-brand Realme is also very fierce, rising from 7.3% to 12.8% in a quarter. Realme currently ranks fifth and it is approaching Xiaomi. If we consider Realme’s market share with Oppo’s, then the Chinese manufacturer is unmatchable. Its market share will be a whopping 33.1%.

In addition, Vivo has made rapid progress. It has accounted for 17.9% in Southeast Asia, an increase of 4.6 percentage points in a quarter. Furthermore, Xiaomi ranks fourth with 14.0% after a loss of 0.8 percentage points.

Oppo emphasized that it has been deeply cultivating the Southeast Asian market since 2009, and has gained more recognition with its outstanding products and operational strategies. Southeast Asia not only has geographical advantages but is also convenient for Chinese manufacturing and transportation. In addition, the distribution to Southeast Asia is pretty easy and fast too. More importantly, its cultural customs and consumption habits are similar. This means that Oppo can implement its “localization” strategy in the region.

Thanks to the stimulus of the Southeast Asian and European markets, Oppo is also optimistic about the global mobile phone market. In the second half of the year, the company believes that it will increase its orders to 110 million units. This will be nearly double the number of smartphones it shipped in the first half of the year.

Previous Samsung Galaxy S10 series gets One UI 2.5 with a lot of new features

Next Realme 7 and 7 Pro launched: ultra-fast charging arrives in the mid-range