Back in July, Oppo introduced the Global variant of the Reno4 Pro. Instead of the 5G-enabled Snapdragon 765G, the company brought a lesser variant with the Snapdragon 720G. The device went ahead in several markets alongside with its vanilla sibling. Today, the company is rolling out a new software update for the Oppo Reno4 Pro global variant (Via). It bumps up the Android security patch level on the smartphone to September 5, 2020. 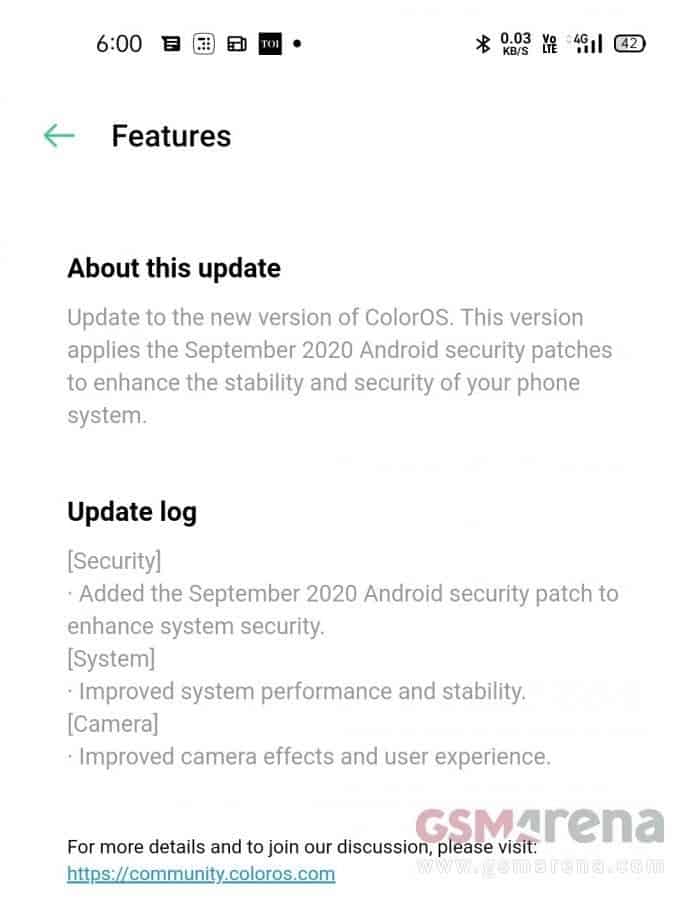 Apart from the new security enhancements, the update also brings a set of improvements for performance and overall stability. Last but not least, we have some improvements to the camera effects. The new firmware update sports build number CPH2119_A11_A.17 and is rolling out in India. Of course, it’s following a gradual pattern. So it may take a few days to reach all eligible units of the Reno 4 Pro.

The Reno4 Pro Global variant has a 6.5-inch Super AMOLED display with FHD+ resolution and a 90Hz refresh rate. Moreover, this panel offers a 180Hz touch sampling rate meaning that it is very responsive for games and quite bright with a peak brightness of 1,100 nits. The panel also hides a fingerprint scanner and has the necessary Widevine certification for running 1080p videos from Netflix. The panel also features curves that effectively make it look like a bezel-less smartphone. It in fact has a 92% screen to bot ratio. The phone weighs just 161g and is 7.7mm thick. On the top left part of this display, we have a punch-hole housing a single 32MP selfie snapper that supports Night Mode.

Moving around to the back, we have a Quad Camera setup sitting on a rectangular shape. Interestingly enough, the camera array is quite different from the one offered by the Chinese version. The phone ships with a main 48MP camera from Sony with Nigh Mode support and Electronic Video Stabilization. We also have an 8MP Ultra-Wide camera and a 2MP macro shooter. Worth noting that the fourth and final sensor is a 2MP Monochromatic Sensor. Oppo has removed the telephoto camera that was found in the Chinese version.

Under the hood, the phone ships with the aforementioned Snapdragon 720G SoC. It’s a power-efficient processor, but unlike its Snapdragon 765G sibling lacks any kind of 5G connectivity. Oppo is aware that this chip is weaker than the Chinese variant, so it is comparing it with the Helio P95 found on the global Reno3 Pro. According to the company, the 8nm Qualcomm chip has a 47% higher single-core performance. Moreover, the GPU is 40% faster than MediaTek’s solution. Despite this, the phone will still be inferior to some Oppo Reno3 Pro units with Snapdragon 765G. However, you get better cameras with the Reno 4 Pro.

The phone comes with a 4,000mAh battery which is more than enough to keep a full day of usage. To make things even better, Oppo paired the phone with an insane SuperVOOC 2.0 system. It provides a 65W charge for the smartphone which allows you to get a full charge in just 36 minutes. According to the Chinese maker, this system is quite safe offering a multi-layer protection setup. The system is monitored all the time and if anything goes wrong, the power is cut immediately
Source/VIA :
GSMArena