Since the release of Hydrogen OS 11, the calls for a new OnePlus smartphone have been rising. Finally, the company announced recently that the OnePlus 8T series will be uncovered on October 15.

Though there are almost 20 days before the phone will hit the market, we have heard too much about this smartphone. So we can form the image of the upcoming flagship. 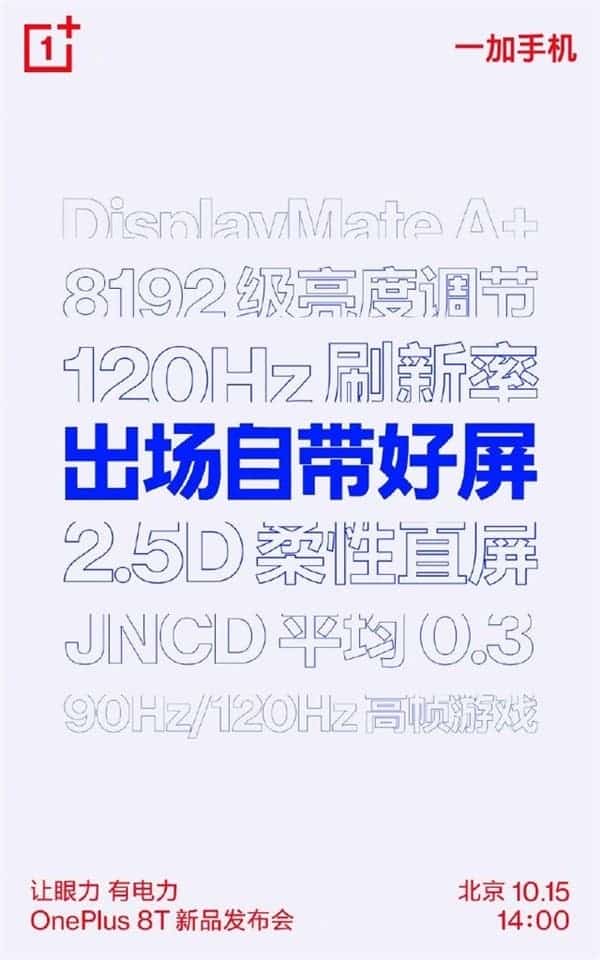 The OnePlus 8 series released in the first half of the year is currently one of the most popular flagships of the Snapdragon 865. But we should say that a large part of the praises is due to the really good screen.

OnePlus 8T obviously inherited this advantage. And the upcoming OnePlus 8T will come with a similar or better display.

According to the leaks and official hints, the OnePlus 8T smartphone will use a 2.5D flexible screen. The latter will support 120Hz refresh rate and 8192 brightness adjustment. In addition, it also will get an authority DisplayMate A+ certification. As you can see, the screen quality of the OnePlus 8T is really strong.

At the same time, Liu Zuohu posted on Weibo that the OnePlus 8T can be regarded as the FHD version of the OnePlus 8 Pro. It uses flexible screen materials with better display effects, higher parameter limits, and more comfortable color performance at a cost.

In addition, the flexible screen material makes the OnePlus 8T screen module lighter than the hard screen by about 10g.

Why is OnePlus always obsessed with high-quality smartphone screens?

The screen of the smartphone is an important part that affects the intuitive experience.

OnePlus has put a lot of effort and cost on the screen. For example, in order to provide users with the best screen, OnePlus has invested 100 million yuan ($14.65 million) in research and development to customize a unique and exclusive display.

Of course, some considerable factors have also become the original motivation for OnePlus to be obsessed with high-quality screens.

Compared with other manufacturers, the young OnePlus needs a breakthrough and a product path that maintains differentiation.

Especially when the upstream and downstream of the industry are gradually beginning to mature, and the homogeneity of smartphones is serious today, it may be an effective way to find a ‘point’ to break it. And this is obviously placed on the screen.

The OnePlus 8T will be released soon. So it’s logical to find much information about its screen coming our way from the company itself. In this regard, the straight screen concept sounds a bit different.

The straight screen has always had good practicality. It has a wide field of vision, is comfortable to operate, and is not easy to touch by mistake. This improves the user experience to a certain extent.

But OnePlus has taken another path, and decided to pack its flagship with a high-refresh rate screen. In fact, while you may think OnePlus just follows the trends, we should say that it is one of the first brands to adopt such a feature.

The screen refresh rate of OnePlus 8T is even higher. It achieves 120Hz, which can display 120 frames in one second. The visual perception is smoother than the traditional 60Hz or 90Hz screens. Opening/switching apps are extremely smooth.

In addition, in the key parameter information exposed by the official announcement, we also saw that the OnePlus 8T will adapt to more 90Hz/120Hz high-frame games. This will undoubtedly be able to more thoroughly take advantage of this high-refresh-rate screen.

The OnePlus 8T’s display has an 8192 level automatic brightness adjustment and JNCD average 0.3.

The former is regarded as one of the highlights of this OnePlus 8T screen upgrade. Compared with the 4096-level brightness adjustment of the OnePlus 8 series, the experience will be more delicate and comfortable.

For example, when moving from a brighter environment to another darker environment, sudden changes in light aggravate the glare of the smartphone screen. The 8192-level brightness adjustment can help smooth the screen brightness and bring a softer vision.

The average JNCD of the OnePlus 8T is 0.3. The current industry standard is JNCD<2, and some top Android flagships can reach 0.4 or 0.5.

The iPhone 11 Pro Max, which has always been known for its excellent color performance, is roughly around 0.8. As you understand, the OnePlus 8T will provide way better viewing performance than many top-notch models.

Agree that we can’t live without smartphones. And smartphones can’t work without screens. Thus, the quality of the screen has a direct impact on daily experience and eye health. In this sense, the forthcoming OnePlus 8T is going to be the best model.