Although the end of the year is approaching, there are still many new phones waiting for their turn to appear on the shelves. Many of them are traditional hot-selling series under many brands. In this regard, OPPO fans are eagerly waiting for the next-gen OPPO Reno 5 series smartphones. Now, there are many leaks concerning this series. Say, just recently, some Weibo bloggers have discovered that the machine is now online in the Ministry of Industry and Information Technology. 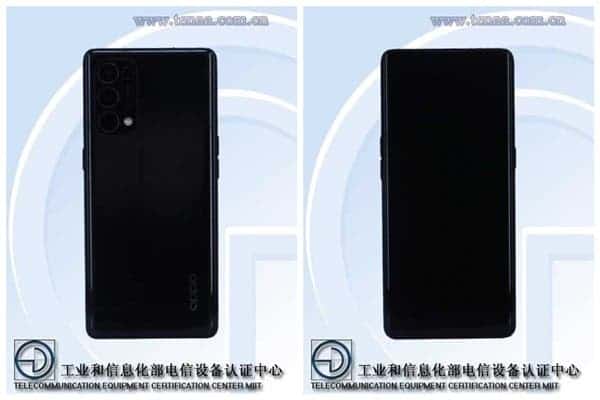 According to the latest information provided by the well-known blogger, the new OPPO Reno 5 series contains at least two versions of the OPPO Reno 5 and the OPPO Reno 5 Pro. Moreover, a new machine suspected to be the OPPO Reno 5 Pro has been appeared on the website of the Ministry of Industry and Information Technology. Plus, there is a couple of photos showing the overall look of the phone. According to them, the machine will use a hyperboloid screen design. Unfortunately, we can’t discern all the design elements, it is not difficult to speculate that the phone will also use a hole-punch full screen. The back design is basically similar to the OPPO Reno4 Pro, and will also use the so-called matrix camera module.

In other aspects, according to previously exposed news, the new OPPO Reno 5 Pro has a screen size of 6.55 inches with a resolution of 2400×1080 and a refresh rate of 90Hz. It will sport a MediaTek Dimensity 1000+ flagship processor and a maximum of 12GB of memory. The front camera has a 32MP resolution, while the rear quad-camera comes with a main 64MP CMOS. The battery is 4350mAh, and it supports 65W flash charging. In addition, the body thickness of the phone is only 7.6mm and the weight is only 173g. Thus, we are dealing with the thinnest and lightest MediaTek Dimensity 1000+ smartphone to date.

However, these are the key features of the Pro variant. But it turns out we can see the third model – the so-called super cup variant namely the OPPO Reno 5 Pro+. Today, we learned about some key features it will come with. The same source claims this phone uses a single-hole curved screen design. The screen’s refresh rate is 90Hz. The front camera has a 32-megapixel resolution and a 50-megapixel quad-camera on the rear. Under the hood, it has a 4500mAh battery, which support 65W super flash charge. Interestingly, this model comes with a Snapdragon 865 mobile platform, and the weight is controlled at about 180g.

The new OPPO Reno 5 series models are expected to be officially announced on December 1. And then, they will officially meet with you before mid-December.

Next Huawei will not rely on Qualcomm's 4G chips despite license