Lava Mobiles the Indian smartphone manufacturer gearing up for the launch of its new smartphones in the Indian market. The invitation is sent out for the 7th January 2021 launch. The company is set to launch Lava Beu that is already listed on the official website. According to some reports, Lava will launch five smartphones in total and a wearable product on the 7th of January launch. Although, the names of smartphones other than Lava Beu are still unknown. 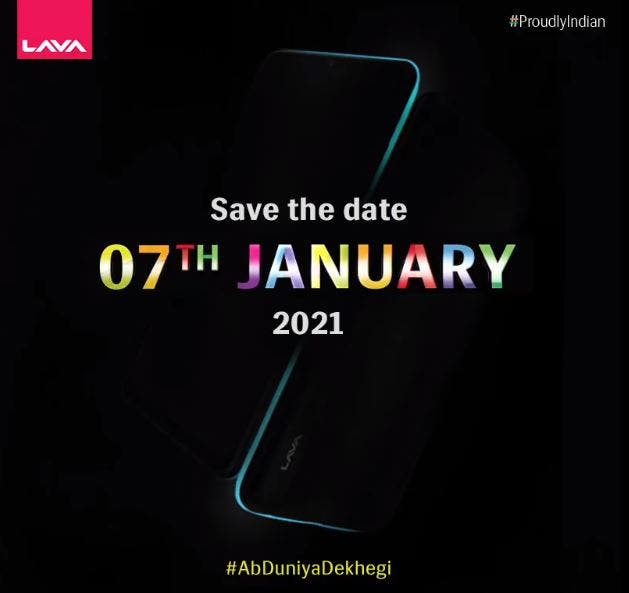 Sunil Raina, President, and Business Head, Lava Mobiles shares the launch event date on Twitter. The company’s tweet says to follow its YouTube and Facebook handle for the 7th January Launch event along with hashtags #abduniyadekhegi and #ProudlyIndian. Talking about smartphones, Lava Beu that was listed on the company’s official website is an entry-level smartphone and priced at ₹6,888(~$93). However, the other four smartphones that are going to launch on 7th January will be priced between ₹5000($68) – ₹15000(~$204).

It was announced on 23rd December 2020. Lava BeU features a 6.08-inch HD+ panel with 720 x 1050 pixel resolution with a 19:5:9 aspect ratio. It comes with an unknown octa-core processor clocked at 1.6GHz(full information will be available on 7th January). The smartphone pairs 2GB DDR4 RAM and 32GB internal storage with a microSD card slot that can support up to 256GB. Lava BeU is has a 4060 mAh battery and runs on Android 10 Go Edition out of the box.

Talking about the optics of the smartphone, it packs a dual-camera setup at the back. Lava Beu has a 13MP with an f/1.85 aperture as a primary camera, 2MP secondary camera. For selfies, there is an 8MP camera on the front side in a waterdrop notch. The smartphone also has a fingerprint scanner at the back. For connectivity, the smartphone has a 4G LTE, Wi-Fi 802.11 b/g/n, Bluetooth 4.2, GPS/ A-GPS, Micro-USB, and a 3.5mm headphone jack. The phone measures 155.5 x 73.3 x 9.82mm and weighs about 175.8grams.

Next Redmi 9 is getting December 2020 security update