Recently, Canalys released a global PC market forecast report. The report shows that the growth rate of computer shipments in the Q1 this year will reach its peak year-on-year. The global PC shipments will increase by 8.4% to 496.8 million units in 2021. Moreover, notebook, tablet and desktop shipments will all increase. 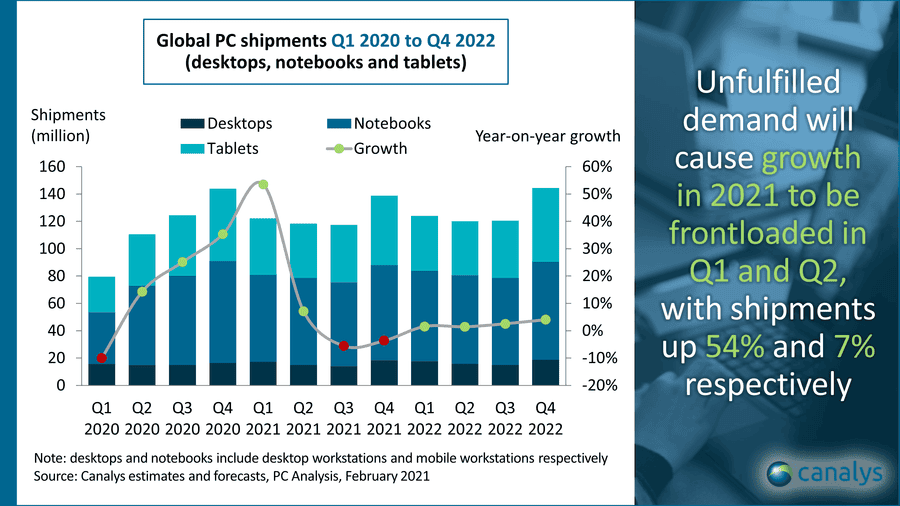 The report shows that the new coronavirus epidemic has led to continuous growth in PC market shipments in 2020. But affected by supply chain problems, this year’s computer output has been limited. As you understand, the problem of chip shortages is difficult to alleviate in a short time. The agency predicts that in Q1 of 2021, PC shipments will increase by 54% year-on-year, and in Q2, it will increase by 7% year-on-year. By the way, the Chromebook will become the highlight of the PC market this year. In Q1 2021, it will achieve 30% growth.

‘Chromebooks and tablets were both big winners in 2020, and Canalys forecasts a rosy future for both product categories this year and beyond,’ said Ishan Dutt, Analyst at Canalys.

‘Both are value-for-money alternatives to more expensive Windows devices, catering to segments that are undeserved by Wintel. The education segment will continue to be a key driver, with Chromebooks facing some of the most severe order backlogs of any PC category. In addition, Canalys also expects the broader commercial segment to expand deployments of Chromebooks and tablets. As economies begin to open up, restricting human-to-human interaction remains important and tablets allow for simple tasks in retail, hospitality, and travel to be undertaken more easily. And in developing markets, Android slate tablets will be of particular importance as they support affordable moves to digital education. Vendors with healthy Chromebook and tablet portfolios will be well placed to achieve growth in the coming years.’ 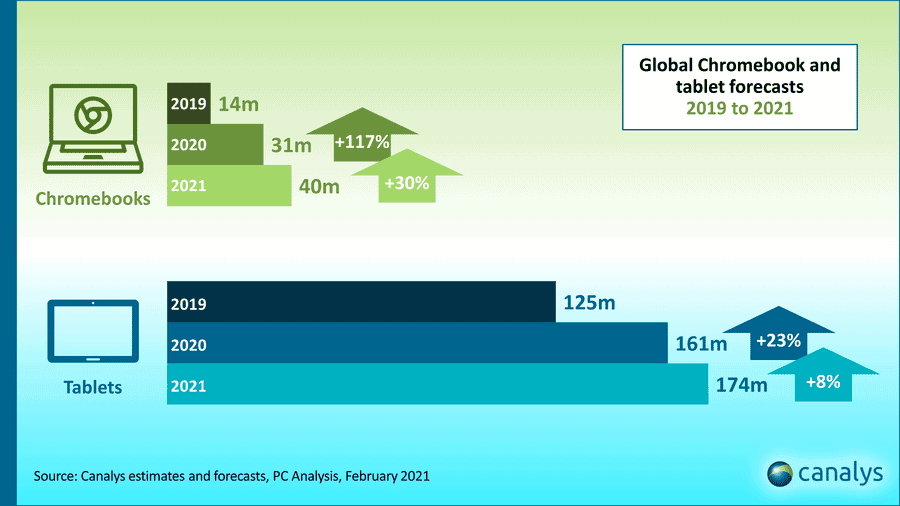 Canalys research director Rushabh Doshi said that after the boom in 2020, the PC industry will continue to grow in the next few years. But due to the uncertainty of the supply chain, the forecast for 2021 and 2022 is conservative. Under the premise of chip shortage, the demand for chips in the automotive, smart manufacturing, and IoT industries has a higher priority than the PC industry. So the cost pressure faced by manufacturers will increase.

Previous Photos of a Huawei dual-screen smartphone have been published