Recently, AndroidPolice and XDA reported that Qualcomm is developing a handheld game console with the Android system onboard. Moreover, the design should be similar to the Nintendo Switch. The device will use Qualcomm’s chips. It may be available next year.

Is Qualcomm Designing Its Own Handheld Game Console?

AndroidPolice said that they have seen pictures of the device. It will have a detachable handle, similar to the Switch’s JoyCon. The handheld game console will also come with an SD card slot, run Android 12 system and support 5G network. At the same time, reports pointed out that the game console has a huge 6000mAh battery. Although there is not much information about the physical size, XDA editor-in-chief Mishaal Rahman said on Twitter that the screen may be 6.65 inches with a resolution of at least 1080p (the Switch’s screen is 6.2 inches, 720p). He also said that the game console may have a fan.

In other words, specifications of this device make us think of it as a big smartphone with a handle and active cooling. But nowadays, many gaming phones have handles and active cooling accessories. So Qualcomm must give users a reason why they should use a dedicated device to play games. 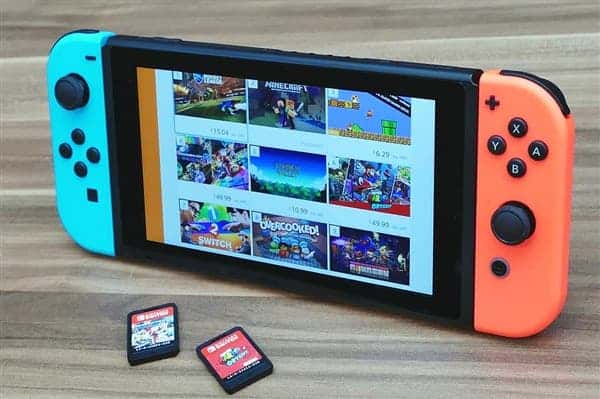 Anyways, Qualcomm does hope that the device can be commercialized and may be offered for sale in operator retail stores. Its price target is $300, which is the same as the full-size Switch.

We also shouldn’t exclude a possibility that we are just talking about a prototype product. Chip manufacturers, including Qualcomm, often make prototype devices to help other manufacturers design around their SoC. Sometimes, other companies under different brands sell these reference products. W call it ‘white labeling’.

Since Nvidia’s handheld Shield concept became the Nintendo Switch, the handheld gaming market has begun growing rapidly. So it’s not difficult to understand why Qualcomm will focus on the mobile gaming market.

New Switch Game Console With Powerful Hardware Is On The Road

A few days ago, industry reports said that Nintendo will release a new Switch game console sometime around Christmas this year. The main changes include an upgraded NVIDIA chip, 7-inch Samsung OLED display, and a larger memory capacity.

There are many speculations about this new processor. Say, some sources say it could be the Tegra X1+, Tegra X2 (Parker), Xavier, and even Orin. However, the latter three are all car-level chips with high power consumption and are not specifically optimized for gaming equipment. In this regard, Kopite7kimi says that the Switch Pro will use a GPU with the unreleased Ada Lovelace architecture. Earlier we learned that Ada Lovelace will replace Ampere that powers the current generation PC GPUs from Nvidia.

Previous Apple A14x will debut on new iPads, It's based on Apple M1 chipset

Next Realme 8 Pro launched: Is it really a "leap"?