Redmi is associated with a brand that always launches cost-effective products. But there are two concepts that have a conflict originally – gaming product and low price tag. However, it seems Redmi has solved this problem. Today, it released the Redmi K40 Gaming Enhanced Edition. 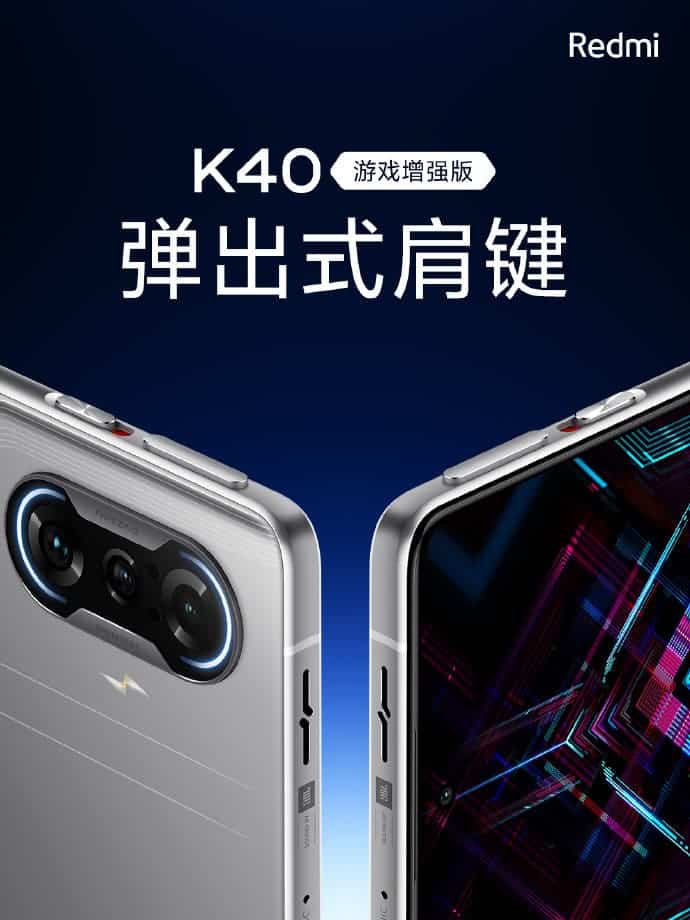 The Redmi K40 Gaming Enhanced Edition starts at 1999 yuan ($308). When looking at the pricing, you may think it’s a pseudo-gaming smartphone. But in fact, there are many surprises this phone comes with. Anyway, the lowest memory configuration is 6GB+128GB. It costs 1999 yuan. But there are other options as well.

The pre-sale has already started and they will go on sale on April 30. 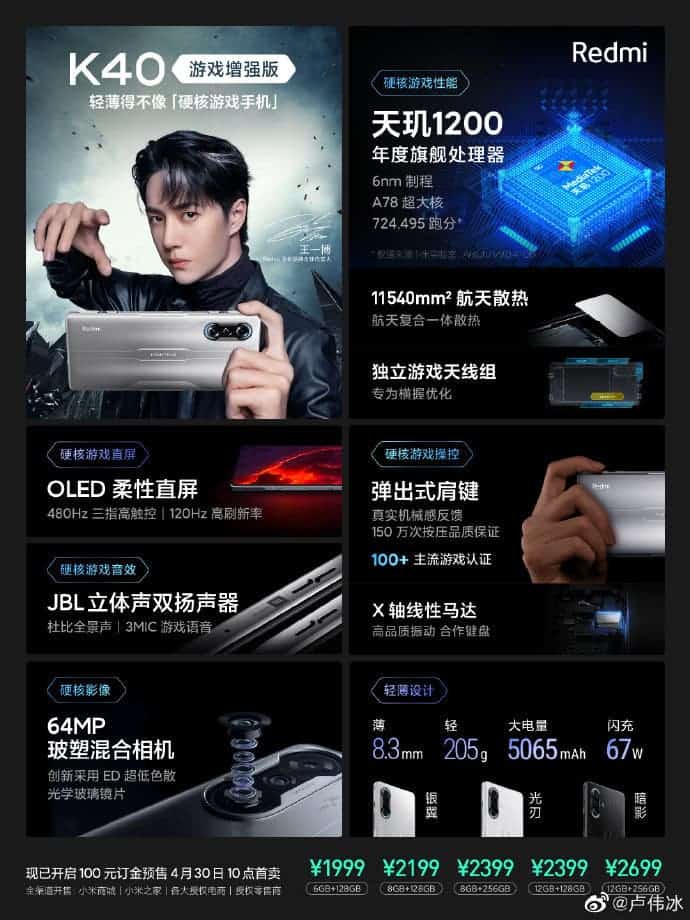 Our protagonist uses an all-metal middle frame and double-sided fifth-generation Corning Gorilla Glass. On the back, it adopts dual-eye camera + high-gloss matte body. As for gaming design details, it comes with a so-called Pulse atmosphere light + lightning flash. There are three colors of “Silver Wing”, “Light Blade” and “Dark Shadow”.

The Redmi K40 Gaming Enhanced Edition may be the thinnest gaming phone in 2021! It is 8.3mm thin and 205g weight. Thus, the manufacturer could solve the heavy pain points of gaming phones. However, the slim body didn’t affect the battery capacity. The handset sports a 5065mAh large battery, which supports 67W flash charging. You can also find various accessories optimized for gaming: a customized “L-shaped” charger with a thin and light body.

There is a pop-up magnetically powered shoulder button. With a single press, you will activate the beast mode. When activated, more than 100 mainstream games can be played even more smoothly. It has a 1.5 million press quality assurance. In fact, when not pressed, we are dealing with a regular top-notch smartphone. But when pressed, it turns into a genuine gaming handset.

The Redmi K40 Gaming Enhanced Edition features the Dimensity 1200 gaming processor. The latter adopts a new generation of A78 architecture; performance is improved by 22%; power consumption is reduced by 25%; it uses a 6nm process; the chip integrates a 5G baseband, ensuring an excellent balance of power consumption. In AnTuTu, the K40 gaming version scored more than 720,000. So it can run all mainstream games smoothly.

The Redmi K40 Gaming Enhanced Edition uses Redmi’s exclusive heat dissipation technology. It has a fully-covered a 11540mm² aerospace composite heat dissipation film, which can drop the body temperature by 2°C in seconds. This phone is also the first to come with a boron nitride heat-dissipating material to solve the contradiction between 5G signal and heat dissipation.

This phone has an antenna group specially developed for game scenarios. It has an independent gaming antenna group as well as a intelligently switches between WiFi 6 signals. Dual waist 5G antennas are arranged horizontally to cut the network quickly.

The Redmi K40 Gaming Enhanced Edition unites the world’s top speaker group brand JBL to provide an outstanding sound experience for gaming. It has dual speakers + 3MIC designed for games. Plus, the phone also comes with a Dolby Atmos + Hi-Res double gold standard. Due to the MISOUND algorithm it achieves a perfect sound quality. There is also the X-axis linear motor to provide shocking when shooting or the likes during the game.

This phone supports multi-function NFC. It also has an IP53 rating and is scratch-resistant and splash-resistant. In addition, the handset comes with MIUI12.5 out of the box.

Though the gaming smartphones don’t boast of strong camera performance, the Redmi K40 gaming phone can be an exception. It has the industry’s first ED ultra-low dispersion optical glass lens. Plus, it sports a flagship-level ultra-clear triple-camera. The 64MP sensor has a super light sensitivity and better low-light shooting. It is accompanied by a 120° wide-angle lens and a 40mm macro lens.