According to recent reports, Chinese manufacturer, Honor is currently working on its latest flagship. The Honor 50 series is slated to arrive in the first half of this year. However, there are rumors that this device will launch in early June. The latest information regarding this series is with regard to its fast-charging capacity. 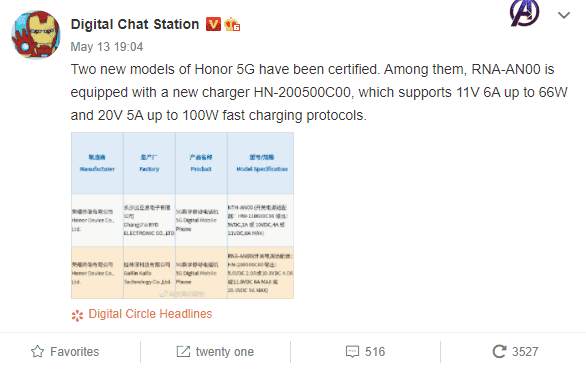 Popular Weibo leakster, @DCS, recently revealed that two new Honor models just got the Chinese 3C certification. The model number of the device is RNA-AN00 and it comes with a new charger HN-200500C00. This charger supports 11V 6A up to 66W and 20V 5A up to 100W fast charge protocol. According to the report, this certification is for the Honor 50 series. 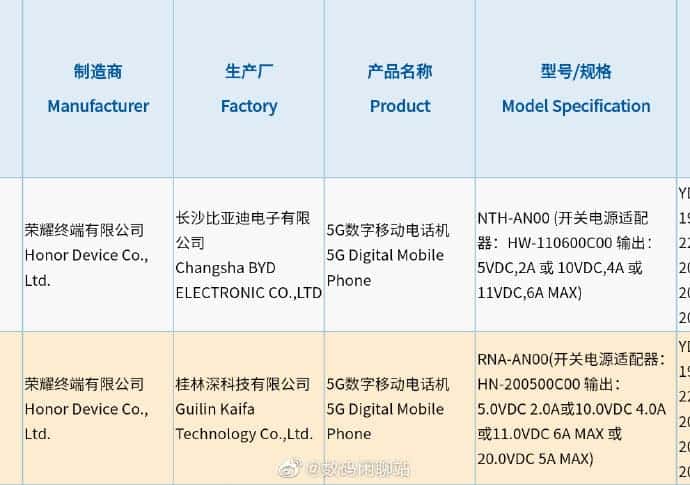 The speculations so far claim that the Honor 50 Pro+ will come with a Snapdragon 888 SoC. This smartphone will also use a 50MP main camera in a quad rear camera setup. Interestingly, the rear camera module adopts a similar design to the Huawei P50 series. The camera design uses an upper and lower ring structure giving it a binocular-like appearance.

Furthermore, the rear camera module of the Honor 50 series will have a vertical alignment. Nevertheless, the regular model will have just two camera sensors on the rear. It will also have an LED flash beside the camera sensor. In terms of sensor size, one of the cameras is larger than the other one. This suggests that the larger sensor will have a larger pixel size. From the leaks so far, it appears that Honor will introduce a new colour scheme with the Honor 50. This device appears to have a combination of blue and purple gradient colour which is quite new to Honor devices.

As of now, the exact number of models in this series is still a subject of discussion. While some report says three models (Honor 50, 50 Pro and 50 Pro+), others say that this series will have just two models (Honor 50 and 50 Pro). However, it appears that one of these models will come with a Dimensity 1200 SoC. Just like we said earlier, the Pro model will use the SD888 SoC. This means that the Dimensity chipset will be for the standard model. We can safely speculate that they will use OLED displays and their RAM size should be from 8GB of RAM. The battery should certainly be over 4,000 mAh and of course, there will be fast charging support. It must be noted that these are just speculations and there is no official information for now.