The series includes two models, namely the Honor 60 and the Honor 60 Pro. Among them, the latter is the world’s first phone powered by the Snapdragon 778G Plus chip. Moreover, in comparison to the vanilla version, this model looks more stylish, has better performance, and takes more quality photos.

The Honor 60 Pro continues using the design style of the previous generation. But there are new design elements as well. It still uses the quad-curved design, which was first introduced last year by the Honor Magic. The corner transition is more rounded. 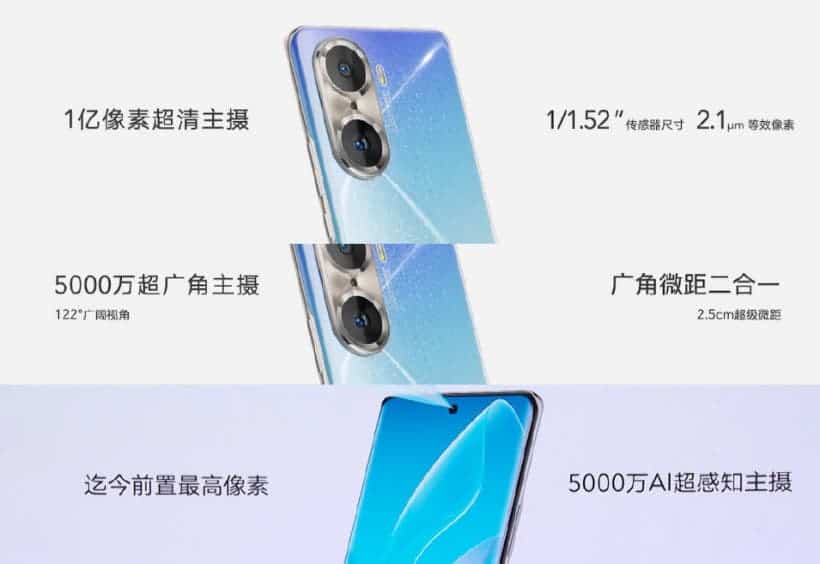 On the opposite side, the Honor 60 Pro continues the previous ring design. But the back shell now has a brand new visual effect. It uses very complex diamond technology and polishing effects to create a unique effect.

The Honor 60 Pro sports the world’s first Snapdragon 778G Plus processor. The latter uses TSMC’s 6nm process technology. It consists of 4 A78 architecture cores, the highest frequency of which is up to 2.5GHz. it supports unique optimizations such as multiple ISPs.

At the same time, the Honor 60 Pro has also created a sub-pixel super-sensing touch experience for FPS games. It improves the direct coordination between touch and screen refresh rates. Every time the finger moves 1/8 pixel, the content of the game screen will be refreshed simultaneously.

Under the hood, the phone also carries a 4800mAh large battery. It comes with an original smart power-saving engine, which can bring a long battery life experience. At the same time, it also supports 66W wired fast charging. In effect, it will charge to 60% in 15 minutes.

In other aspects, the Honor 60 Pro supports the latest technologies such as WiFi 6, NFC, dual 5G, and Bluetooth 5.2.

The imaging system is one of the biggest highlights of the Honor 60 Pro. Its rear camera comes with a 100MP ultra-clear main camera, a 50MP ultra-wide-angle lens (122°), and a 2MP depth of field lens. The front camera has a 50MP resolution. Thus, this AI super-sensing lens is comparable to a top-level flagship camera.

In fact, the Honor 60 Pro is aimed at vloggers. It can recognize five gestures in the air through the front camera. The phone has further improved the “one-click filming” experience, adding a more simple and easy-to-operate one-click shooting function.

On the basis of the Honor 50 series “micro-movie” mode, the phone has got 20 more video shooting templates. Users can start recording with one button, follow the shooting guidelines to easily complete story shooting, and realize one-click sharing and other operations.

It is already available for pre-order but the phone will go on sale on December 10.

As said, there was a vanilla version as well. The Honor 60 adopts a 6.67-inch OLED super-curved screen. Both front and rear panels have a symmetrical hyperboloid design with 58° curvature.

In terms of photography, it comes with a 100MP ultra-clear main lens, an 8MP ultra-wide-angle lens, and a 2MP depth-of-field lens. There is a 32MP AI super-sensing lens on the front.

Like the Pro variant, this one also supports “AI gesture recognition”.