The required materials for the Samsung Galaxy Z Fold 3 have already been put into production but not core components. In accordance with past practices, after the mass production of components, manufacturers officially announce new products in two to three months. However, this is late than we expected. The main reason for the delay is to have more sufficient stocks after the announcement. The same happened with the iPhone 12 series and many other flagships as well. And we should also keep in mind the whole world is suffering of the chip shortage problem. So it’s quite logical that the Korean company pushed back the launch date of this handset.

Recently, we got another rendering of the Galaxy Z Fold 3. It shows that the phone still continues the left and right clamshell design of the previous two generations. But it is more rounded than the previous generation’s overall body design. 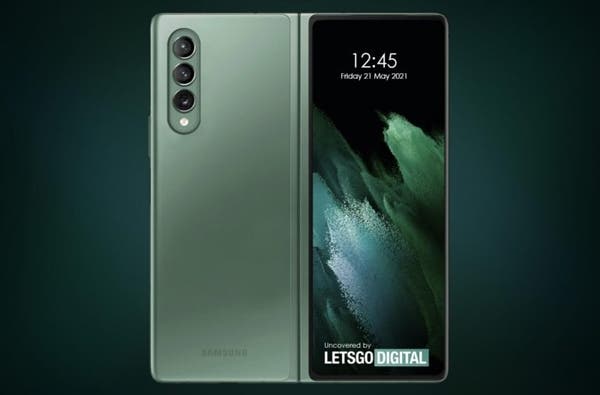 At the same time, the rendering also shows that the screen-to-body ratio of the external screen has been increased. Now, it covers almost the entire front panel. Compared with the previous generation, the look of the Galaxy Z Fold 3 is much better. Plus, larger screen ensures displaying more information.

It is worth mentioning that the Galaxy Z Fold 3 could become the first smartphone of Samsung to use an under-screen camera technology. The camera will be hidden under a 7.56-inch internal screen. Plus, this machine will also become the world’s first under-screen folding flagship smartphone.

Previously, we learned that the Galaxy Z Fold 3 will come with the Snapdragon 888 processor. Also, the manufacturer will equip it with a new generation of UTG glass technology. The latter can achieve higher durability and flatness. The thickness of the glass has been improved as well. The hardness can reach level 5, which can easily handle S Pen writing.

Another interesting feature could become the replacement of physical buttons with touch buttons. And though there is no official confirmation of this, we have seen a patent granted by Samsung. So there is every reason to think the South Korean company may manage to use this new approach in its upcoming folding screen smartphone.

Previous HUAWEI HarmonyOS 2.0 released: Here is all you need to know

Next AnTuTu Performance List For May: Flagship And Mid-Range Phones