Long ago, Huawei’s ex-brand Honor officially announced that it would hold a new product launch conference on August 12. As you guess, at the event, the company will uncover the next-gen flagship namely the Honor Magic 3. By the way, this is the first top-end model of Honor after independence.

Surprisingly, Honor keeps everything in secret and we haven’t even seen real photos of the forthcoming smartphone. This caused a lot of stir. 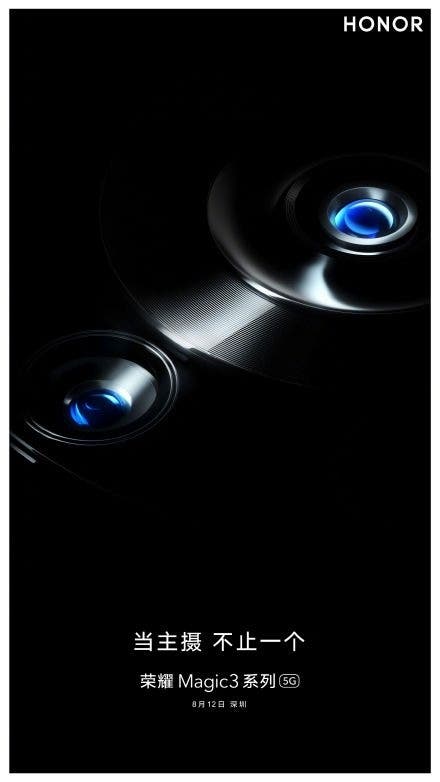 We should note that all previous models with more than one main camera are capable of bringing better quality due to the main camera-level ultra-wide-angle lens. Moreover, it adds more gameplay. We saw this in the Honor 50 series, when the camera could support a multi-mirror simultaneous recording and other function.

An Honor executive also said the phone will have a separate “movie” function. Through software and hardware collaboration as well as AI computing capabilities, it will bring ordinary users an ability to shoot large movies with one click.

The Honor Magic 3 will be the first to sport the Snapdragon 888 Plus chip. This is the most powerful processor in the Android camp at the moment. It will not only bring a powerful ISP image processing system, but also a strong performance output.

Previously, we saw the Honor Magic 3 leaked in GeekBench. The screenshot showed that the machine runs Android 11 system. Also, it reached a single-core score of 1215 and a multi-core score of 3806. This is an obvious performance improvement compared to the regular version of the Snapdragon 888.

Moreover, we know that the Honor Magic 3 series will also come with 12GB of memory. Of course, it will support a memory expansion technology. So the final memory performance may be comparable to 16GB of memory, bringing a better experience.

Lastly, from various leaks and TENAA documents, we learned that the Honor Magic 3 will sport a waterfall screen. The 6.76-inch OLED display will come with a resolution of 2772*1344. There will be two openings on the front dedicated for two selfie shooters. The Honor Magic 3 standard version will support 66W fast charging, whereas the high-end version will support up to 100W fast charging and 50W wireless charging.