Earlier, Meizu announced that in 2021 it will be limited to the release of the flagships Meizu 18 and Meizu 18 Pro. But then something made it change its plans; and on September 22 its lineup will be replenished with three new products at once. Meizu 18s, Meizu 18s Pro and Meizu 18X. In anticipation of the release, the manufacturer launched a promotional campaign dedicated to new products.

So, today a teaser appeared on the network, revealing the design of Meizu 18s and one important, according to the company, feature. The novelty will weigh only 162 grams, and the exterior is borrowed from its predecessor; offering a thin-frame display with a round hole for the front camera and a rectangular block of a triple main camera.

The main change in the Meizu 18s is expected to be the Snapdragon 888+ chipset. The smartphone should offer an AMOLED display with 120Hz refresh rate and QuadHD + resolution, a 3910mAh battery and 36W fast charging. Self-portraits can be created on a 16 megapixel camera; and a set of sensors on the back will include 64 megapixel + 16 megapixel + 8 megapixel modules. 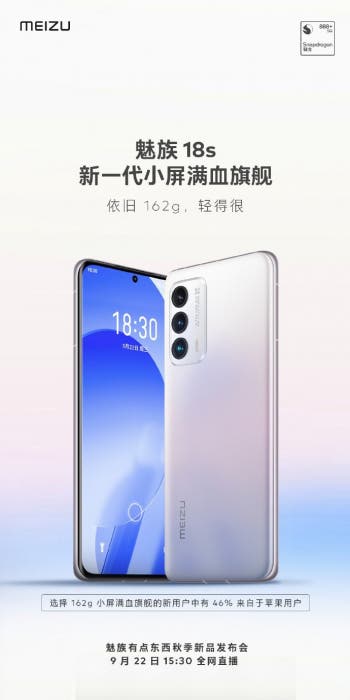 Meizu will bring the Blue Charm brand back to the market

At one time, Meizu was a kind of analogue of Xiaomi. Smartphones of these two companies were often compared and the choice of inexpensive devices often boiled down to the fact that you had to choose between the devices of the two companies. The crisis began when the Meizu 7 series saw the light of day; which was pretty much criticized for betting on the Helio X30 chip and an additional screen on the back. As a result, the company had to sell smartphones for a song and seriously spoil its financial situation.

Also, over time, not without help from the state, it was possible to get out of the debt hole and the model range of the company’s devices was reduced to a minimum. At the same time, the stake was made not on affordable models, but on devices from the flagship segment. Now Meizu decided to remember its glorious past and those devices that really made its name and sales.

In addition, the company recently announced the return to the market of the Blue Charm series. Meizu said that 1269 days after the creation of devices in this line was paused, they are returning. Recall that the release of models within this family was discontinued in March 2018; about 3.5 years after they entered the market.

Next iQOO Z5 with Snapdragon 778G will reach India soon

Meizu 18s / Pro Features: Everything We Know Ahead Of Tomorrow’s Launch