Over the past few days, there have been several reports regarding the upcoming Xiaomi 12 series. For those who are unaware, Xiaomi has dropped the “Mi” nomenclature. This means that its new smartphone will be Xiaomi 12 and not “Xiaomi Mi 12”. Recently, some renders of the Xiaomi 12 appeared online. These renders are from Letsgodigital and they are based on a recent Xiaomi design patent. The overall design of the renders shows that the front is not much different from the Xiaomi Mi 11 series. The four corners of the display are very round and it uses a curved screen design. Of course, the bezels on all sides are ultra-thin. 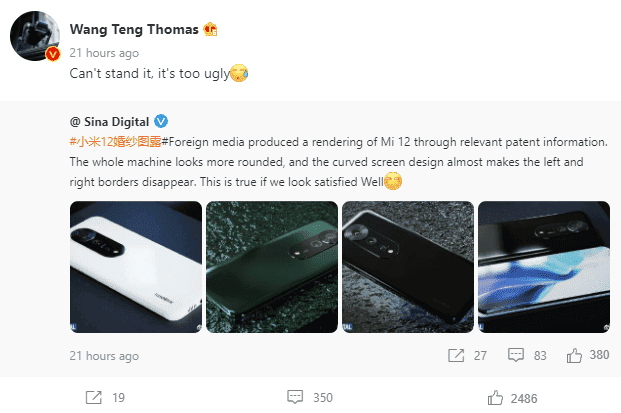 According to the render, the Xiaomi 12 series may use the under-screen camera design. On the rear, the camera design is unique. In addition to a huge round main camera, there is also a square periscope telephoto camera below, which looks very much like the rear fingerprint module of an early Android smartphone. Reacting to these renders, Redmi’s product director, Wang Teng, said that this smartphone is too ugly. In his reaction to the renders, he said “Can’t stand it, it’s too ugly”. Judging from Wang Teng’s statement, this current image is nothing like the appearance of the Xiaomi 12. This is the first response from a Xiaomi official regarding the unofficial renders of the Xiaomi 12.

In terms of ID design, the Xiaomi 12 series flagship model will also adopt an appearance scheme similar to that of Xiaomi Civi. The Xiaomi 12 series will use a ceramic back shell which is very attractive. In the camera department, this upcoming digital series from Xiaomi will use a 50MP main camera. This is contrary to earlier reports that this smartphone will come with a 200MP Samsung main camera. However, there are reports that this 50MP main camera will adopt an ultra-large bottom solution, supporting 1920fps super slow motion. This smartphone will also come with a 50MP high-quality ultra-wide-angle lens. The periscope telephoto is also a 50MP high-quality lens.