Yesterday, there were reports that the Nubia Red Magic 7 got a new wireless network certification. This certification shows that the gaming smartphone will come with Qualcomm Snapdragon 898 SoC. A recent report from popular Weibo leakster, @DCS, shows that in addition to the Red Magic 7, there is also another Snapdragon 898 gaming smartphone. This device is the Black Shark 5. 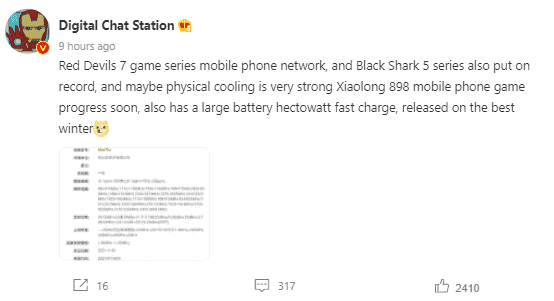 The Black Shark series prides itself as one of the most powerful smartphones in the industry. AnTuTu recently announced the latest Android flagship mobile phone performance rankings. This ranking shows that Black Shark 4S Pro still ranks first with a score of 875,902 points. According to detailed running score data, the main points for Black Shark 4S Pro are MEM scores, which is almost the highest score on the entire list.

The biggest reason for this is that the Black Shark 4S Pro uses a combination of SSD+UFS 3.1 flash memory. The SSD storage solution is the same NVME protocol that everyone knows on the PC side, which brings a very big bonus. Previously, Black Shark claims that the SSD memory disk array system can increase the read performance by 55%. Furthermore, the company also claims that it can increase the write performance by 69%. Of course, the comparison is relative to other smartphones in the industry.

As a gaming phone, the read and write performance will bring a very big improvement in the user experience. According to the current product planning, the Black Shark 5 series is likely to continue this configuration, and will even be further decentralized to the standard products. With the top performance output of the Snapdragon 898, it is expected to be on the most powerful smartphone list again.

Read Also:  Black Shark 5 To Debut Soon: Snapdragon 8 Gen 1 Is On Board

Ahead of the new gaming flagship launch, the tipster @DCS earlier released some tidbits. Apparently, the Black Shark 5 will have the model number KTUS-A0. The tipster notes that the new flagship will come with 100W+ fast charging. Since the Black Shark 4 series come with 120W fast-charging support, we can expect its successor to get basically the same 120W charging. For now, this is the maximum charging Xiaomi is offering for its commercially available smartphones. The company already has a 200W HyperCharge technology, but it is yet to debut in any commercial product.

Unfortunately, other details such as display size, design, and other gaming-related specs have not been disclosed by the company. Anyway, we can expect the battery capacity to be equal to or above Shark 4’s 4,500 mAh capacity. The display can have a Full HD+ resolution and up to 144 Hz refresh rate like its predecessor. Although a QHD+ means that performance will be sacrificed, we can’t discard a jump in the resolution. After all, the faster processor can compensate for performance.

Next Blackview offers big saving deals in AliExpress 11.11 Sale with up to 70% off