Xiaomi 12 series China launch might be sooner than expected if rumors making the rounds online prove to be true. The tech company is reportedly gearing up to mass-produce its latest flagship smartphones under the Xiaomi 12 series. As expected, the upcoming lineup has been floating around the rumor mill lately. Now, more pieces of information about the series’ launch timeframe have surfaced online.

The Chinese smartphone manufacturer seems to be following in the footsteps of Samsung in terms of prepping to mass-produce its next flagship smartphone. Noted leaker Digital Chat Station has shed more light on the Xiaomi 12 series’ mass production in their latest Weibo post. Likewise, more details about the Xiaomi 12 display popped up on the internet, suggesting that the flagship smartphone will get a 2K AMOLED panel, coupled with an advanced refresh rate.

The hotly-anticipated flagship series from Xiaomi could go official in December this year. The word on the street is that the Chinese tech behemoth will be unveiling Xiaomi 12 series after Qualcomm announces its equally awaited flagship processor. Moreover, the semiconductor company is likely to take the wraps off its next flagship processor on November 30 at the Qualcomm Summit. However, it is worth mentioning here that Xiaomi is still mum on its plan to announce the Mi 11 series successor. 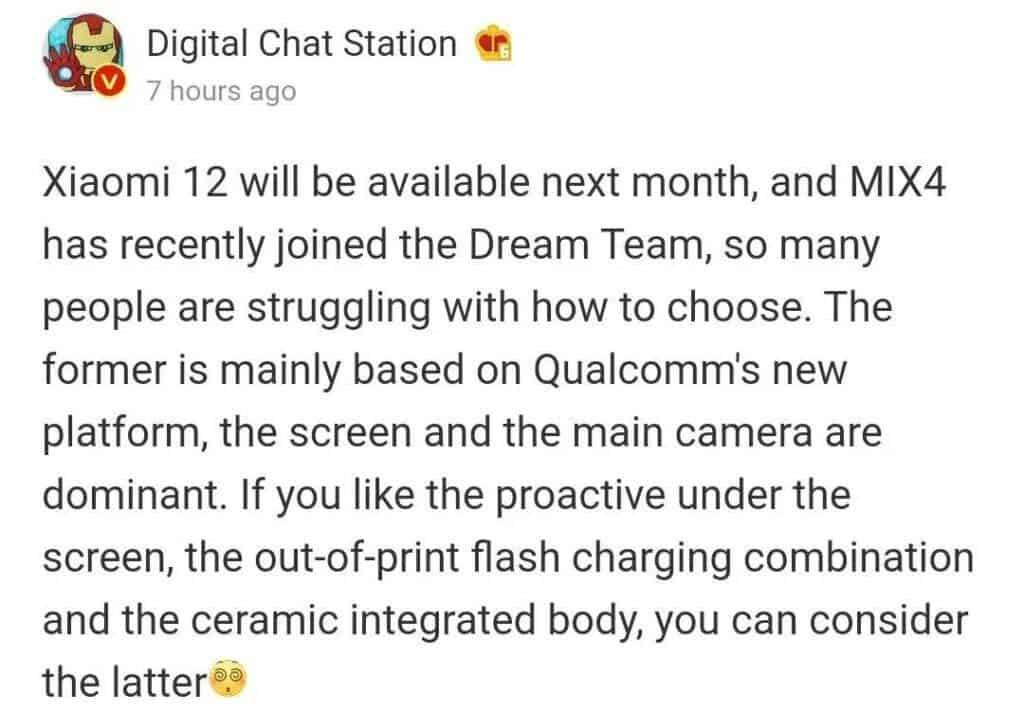 Amid the lack of an official confirmation, renowned tipster Digital Chat Station suggests that the flagship series will go official in the company home country of China next month. Regrettably, the DCS did not divulge the exact launch date. Nevertheless, the leaker claims that the series will pack the next flagship processor from Qualcomm. Later this month, Qualcomm will probably take the wraps off the Snapdragon SM8345 SoC (Snapdragon 898 SoC). Aside from that, the leaker suggests that the Xiaomi 12 series will boast an impressive camera setup and display.

Previously surfaced reports suggest that the Xiaomi 12 series will boast an impressive array of features. Aside from that, the upcoming lineup will come with top-notch specifications. For instance, the series will feature a 50MP main camera. Xiaomi could equip the upcoming series with a GN5 sensor from Samsung. Moreover, the phone is likely to house three rear-mounted cameras. This includes a 50MP camera for ultrawide and telephoto shots. Furthermore, the sensor could support a 5x periscope zoom.

Details about the Xiaomi 12 series smartphones’ display are still few and far between. The display size is still a mystery. However, the upcoming smartphone will reportedly offer an impressive screen-to-body ratio. Also, the display will reportedly feature an extremely small hole punch cutout to house the selfie camera. Furthermore, the phone could offer 100W fast charging support. However, Xiaomi could adopt the fastest 120W fast charging technology for its flagship series.