The Xiaomi Black Shark 4s Pro smartphone has retained its AnTuTu title by topping the benchmark for the third consecutive month. AnTuTu Benchmark has unveiled an Android smartphone chart for December 2021. The chart reveals the best performing Android phones for the aforesaid month. The benchmarking website recently shared the list of the top 10 mid-range and top 10 flagship smartphones.

Smartphones that pack Snapdragon 888 SoC under the hood dominate the top 10 flagship smartphones chart. The mid-range chart, on the other hand, is dominated by phones that are powered by Snapdragon 700 processor. For the third consecutive month, the Black Shark 4S Pro is leading the charts. It is followed by the RedMagic 6S Pro, which packs the Snapdragon 888 Plus processor. The average score of the RedMagic 6S Pro is 852,985. 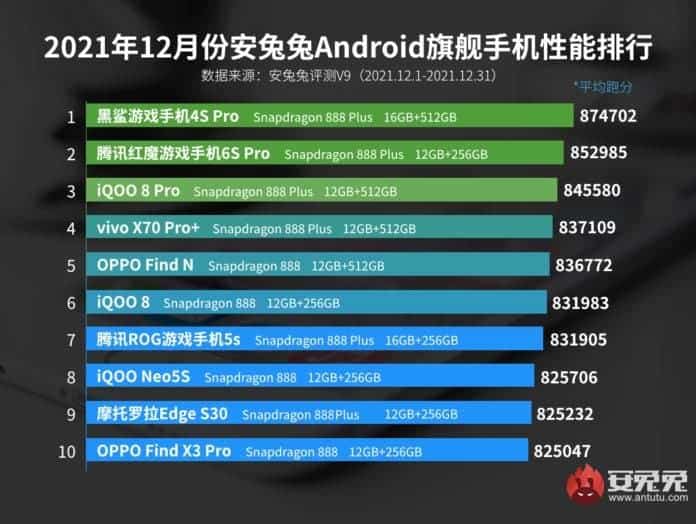 The iQOO 8 Pro grabs the third spot with a score of 845,580, while the Vivo X70 Pro+ and the OPPO Find N secured the fourth and fifth positions respectively. Moreover, both the Vivo X70 Pro+ and OPPO Find N smartphones feature the Snapdragon 888 processor. However, AnTuTu did not mention phones with Snapdragon 8 Gen 1 SoC citing a lack of data. It is imperative to test at least 1,000 units via AnTuTu in a bid to acquire an average score. Aside from that, testing 1,000 units is necessary to be featured in monthly top 10 charts.

The Moto Edge X30 and Xiaomi 12 smartphones could dethrone the Black Shark 4s Pro when the Chinese benchmark platform releases its performance chart for January 2022 next month, carrying an average score of over 1,000,000. As mentioned, smartphones with Snapdragon 700 SoC have dominated the mid-range chart. At least 9 out of 10 phones in the chart either pack a Snapdragon 778G processor or the Snapdragon 778G Plus chipset under the hood. The iQOO Z5 with UFS 3.1 internal storage claims the mid-range segment throne with a benchmark score of 567,524. 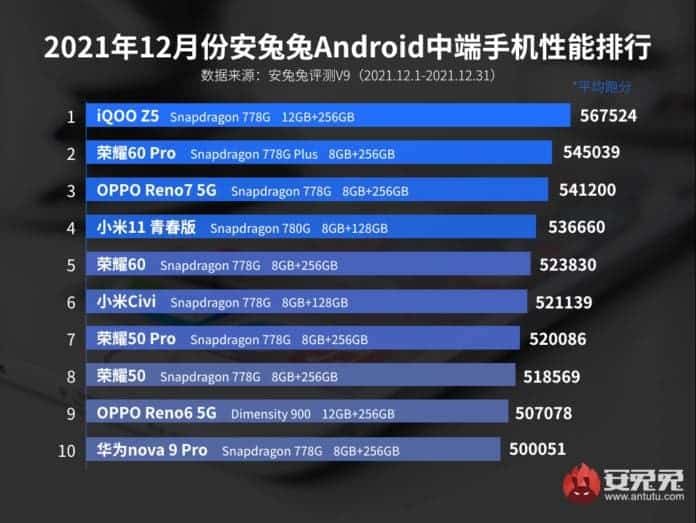 The second and third positions have been filled by the Honor 60 Pro and OPPO Reno7 5G smartphones, respectively. Despite not packing a Snapdragon processor, the Oppo Reno6 5G has managed to secure the ninth position with a score of 507078.

The Black Shark 4S Pro sports a mammoth 6.67 inches display. The phone draws its power from a Qualcomm Snapdragon 888 Plus processor. Furthermore, it ships with 12GB of RAM. In the photography department, the Black Shark 4S Pro houses a 64MP main camera, an 8MP camera, and a 5MP camera at the back. Upfront, the phone features a 20MP shooter for capturing selfies and video calling. Aside from that, a 4500mAh powers up the entire system.