OPPO’s sub-brand, Realme will split the Realme 9 series smartphones launch between January and February 2022. Say, the first model from the series dubbed the Realme 9i will hit the market on January 10. But apart from this device, there are up to three other models in the lineup – Realme 9, 9 Pro, and 9 Pro+. Actually, we have been getting news concerning only a few of them. And this is for the first time when we got a chance to learn about the features of the Realme 9 Pro.

The Realme 9 Pro (code number RMX3472) has been certified by the TUV Rheinland site. The listing shows some features of the forthcoming device, especially the battery capacity. Honestly, we should say that this is not the first time when we hear about its certification. In the past, the handset was spotted Indonesia’s SDPPI and TKDN, Thailand’s NBTC, and Europe’s EEC. 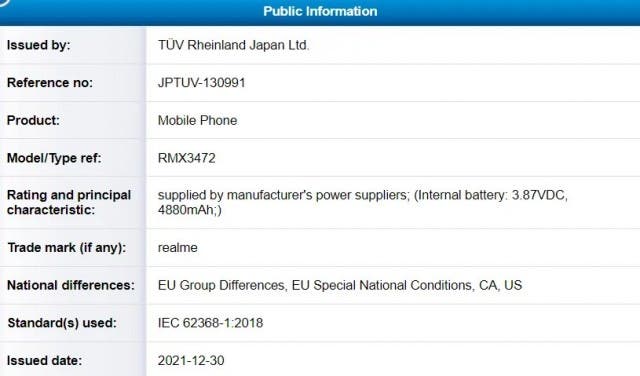 Anyway, TUV certification of the Realme 9 Pro says that it will come with a 4,880mAh rated battery. In other words, the battery size on the paper might be 5,000mAh. At the moment, we still have no information on whether it will support fast charging or not, but we guess it will.

Our assumptions are not groundless. The previous Realme 8 Pro came with support for 50W fast charging. That’s why we think the manufacturer will at least keep this feature.

As for hardware, recently, we heard that the Realme 9 Pro may sport the Dimensity 810 chip. At the same time, the Realme 9 Pro+ ought to feature the more powerful Dimensity 920 chips. Both devices should appear on the shelves sometime in February.

The Realme 9i is already ready to be launched. That’s why we know much about it. Say, the handset will come with a 6.5-inch IPS LCD display. The latter will have a Full HD+ resolution and a 90Hz refresh rate. On the front, for selfies, the phone will carry a 16MP shooter. But on the opposite side, there will be a triple camera consisting of 50MP (main), 2MP (depth), and 2MP (macro) sensors. Our protagonist will leave the factory with Android 11 on board. Of course, the Realme UI 2.0 will be on top.

Insider, we will find a Snapdragon 680 chipset. In its turn, the SoC will be accompanied by 8GB of RAM and 128GB of built-in storage. The 5,000mAh battery will support 33W fast charging. The rest of the noteworthy features include dual stereo speakers, a side-facing fingerprint scanner, and it will be available in two colors of Prism Black and Prism Blue.