This week kicked off with the premiere of the Realme 9i, which kicked off a series of announcements for the new Realme 9 series. Next month, it should be joined by its bigger brothers, among whom will be the Realme 9 Pro. Thanks to the well-known insider @OnLeaks, we can see what kind of design the manufacturer has prepared for the smartphone.

The sketches of the smartphone show us that the entire line should be in a single design style. Realme 9 Pro is almost identical in appearance to the Realme 9i with the only difference that the location of the LED flash in the main camera has changed. Now it is located in the lower right corner of the camera compartment. The source indicates that the rear camera will receive a custom sensor from Sony.

The smartphone has thin bezels around the perimeter and a round cutout for the front lens in the upper left corner. The AMOLED panel has a diagonal of 6.43 inches; and there is no doubt that its resolution will be FullHD + and a refresh rate of 90 Hz. On the left side, they offered a volume rocker.

According to rumors, the Realme 9 Pro should receive the Snapdragon 695 platform, a 5000 mAh battery with 33-watt fast charging, 6/8 GB of RAM and an Android 12 operating system with a Realme UI shell. For selfies, a 16-megapixel sensor will be available; and a set of modules in the main camera will include 64 megapixels + 8 megapixels + 2 megapixels. Already, we know that the cost of the Realme 9 Pro will be about $ 244. 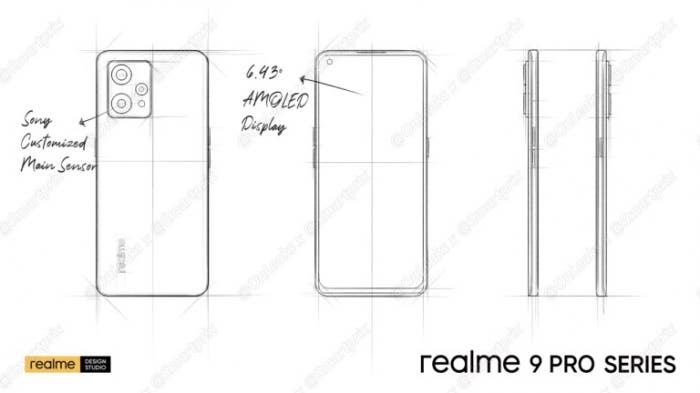