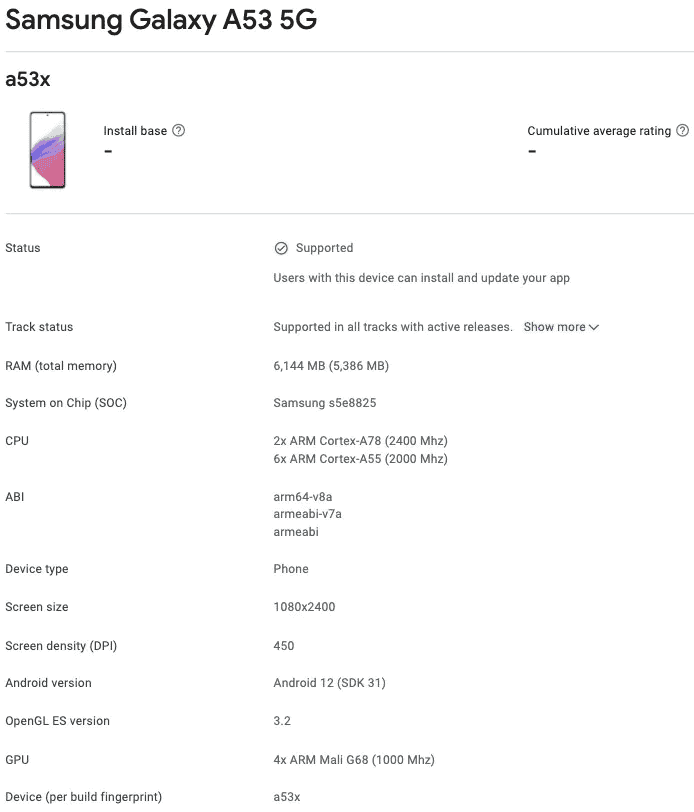 The last year’s Galaxy A52 5G was powered by the Snapdragon 750G, the upgraded Galaxy A52s received a bump with the SNapdragon 778G. For this year, however, Samsung is ditching Qualcomm Snapdragon 700 series chips for an in-house-made Exynos 1200 SoC. The handset has passed through the Google Play Console with this particular platform. The listing reveals the Samsung S5e88245 chipset, which is the Exynos 1200. The processor comes with two high-performance cores clocked at up to 2.4 GHz, and six power-efficient ARM Cortex-A55 cores clocked at up to 2.0 GHz. The SoC also boasts a Mali G68 GPU for graphical tasks.

The Galaxy A53 5G was spotted with 6 GB of RAM, but we also expect a higher variant with 8 GB of RAM. The device will come with 128 GB of Internal Storage plus a micro SD card slot for further expansion. We can’t discard a variant with 256 GB of Internal Storage. The listing also confirms Android 12 will be running out of the box. This might not be a surprise, as Samsung is clearly one of the leading companies in the process of popularizing Android 12. The firmware comes with One UI 4.0 or even the newer One UI 4.1 on the top.

The image shows a punch-hole display or what Samsung calls an Infinity-O panel. The device has a Full HD+ resolution of 2,400 x 1,080 pixels and we’re expecting a 120 Hz refresh rate. The panel certainly will be an AMOLED panel. As per the leaked specs, that’s a 6.5-inch panel. Other leaked specs include a Quad-Camera setup with a 64 MP primary snapper, an ultrawide shooter, and other unspecified sensors. At the front, there will be a 12 MP selfie snapper. The phone will draw its powers from a 5,000 mAh battery with 25 W fast-charging.

As per recent rumors, the Galaxy A53 and A73 5G will launch soon. The device has passed through multiple certifications and Geekbench. So the release seems to be really imminent at this point.