The Realme GT Neo 3 smartphone has been officially confirmed to offer 150W UltraDart Charging support at the MWC event. Realme recently brought the GT 2 series smartphones into the global markets. Moreover, the Shenzhen-based smartphone manufacturer touted the GT 2 and GT 2 Pro as their top-end flagship smartphones. As if that weren’t enough, the company gave us a glimpse of its 150W UltraDart charging tech.

Realme announced that the GT Neo 3 will be the company’s first smartphone to adopt the 150W fast charging tech. Aside from that, the company showed off the GT Neo 3 phone’s charging speed at the launch event. According to Realme, the device is capable of charging from 0 to 100 percent in only 5 minutes. Regrettably, Realme did not divulge details about the battery’s capacity. 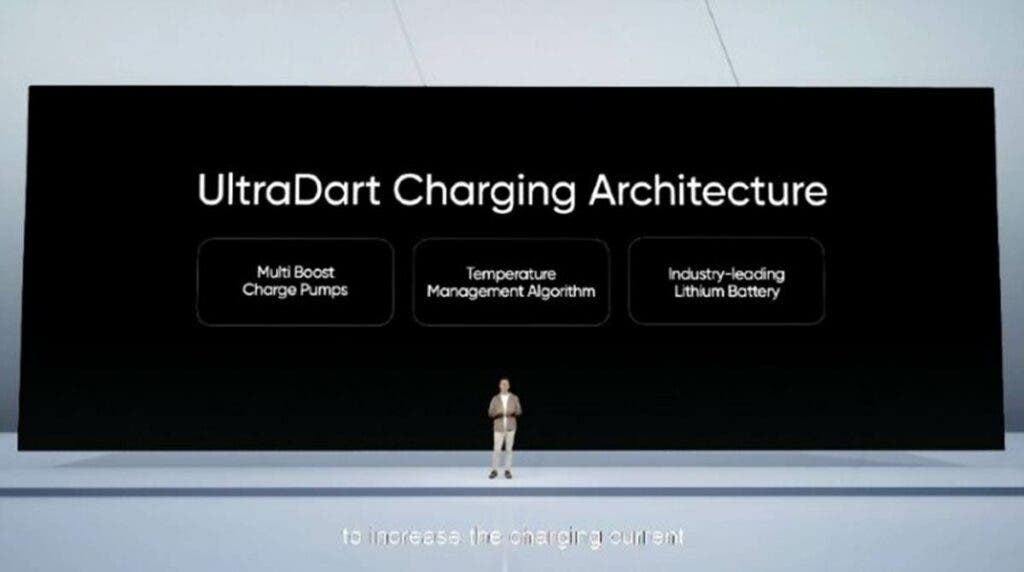 Nevertheless, Realme revealed that the UDCA (UltraDart Charging Architecture) can deliver an output of 200W. However, the company said the Realme GT Neo 3 will not exceed 150W. The tech uses a Multi Boost Charge Pump to bring the charging time down, and expedite the charging process. According to a report from 91mobiles, OnePlus is likely to adopt similar technology for its new Dimensity 8100-powered smartphone Now, let us check out the Realme GT Neo 3 specs and features.

Although Realme has hinted at the launch of the GT Neo 3 5G, details about its exact launch date are still scarce. Leaker Abhishek Yadav recently tweeted a teaser, showing off the phone with a hole-punch cutout. Moreover, this cutout appears to be on the top center of the screen. This is surprising given that most Realme smartphones have the cutout at the top left corner.

Last month, the Realme GT Neo 3 was spotted on the Realme India website, hinting at the phone’s imminent launch in the country. Aside from that, the phone has already passed through the TENAA benchmarking website. The phone is likely to sport a 6.7-inch AMOLED display with FHD+ resolution and 120Hz refresh rate. Furthermore, it could pack the MediaTek Dimensity 8100 chipset under the hood.

The phone will probably ship with 8GB / 12GB of RAM and offer 128GB / 256GB / 512GB of onboard storage capacity. For connectivity, the GT Neo 3 offers options like a USB Type-C port, GPS, NFC, Bluetooth 5.2, dual-band Wi-Fi, and 5G. Moreover, the handset could house three rear-mounted cameras at the back. These include a 50MP main camera, an 8MP camera, and a 2MP lens. Also, the phone will reportedly run Android 12 with Realme UI 3.0 custom skin on top. Lastly, the phone could pack a 4,500mAh battery that supports 150W fast charging.