The robotic segment is slowly advancing, but definitively is advancing. We may not see every new advancement being made in the laboratories. However, we are often surprised every time scientists showcase these revolutionary technologies. In fact, some are already getting real-life applications, and we expect this to grow exponentially in the next few years. We can already see robots helping to clean homes, mounting cars and etc. In the future, we expect to see cleaning robots helping to preserve the environment. Meanwhile, a Florida nonprofit company has just enlisted the help of a quite unique product, BeBot. The new “device” or remote-controlled robot will clean the beaches, removing cigarette butts, bottle caps, and other small pieces of litter. That’s another advancement to make the cities smarter. 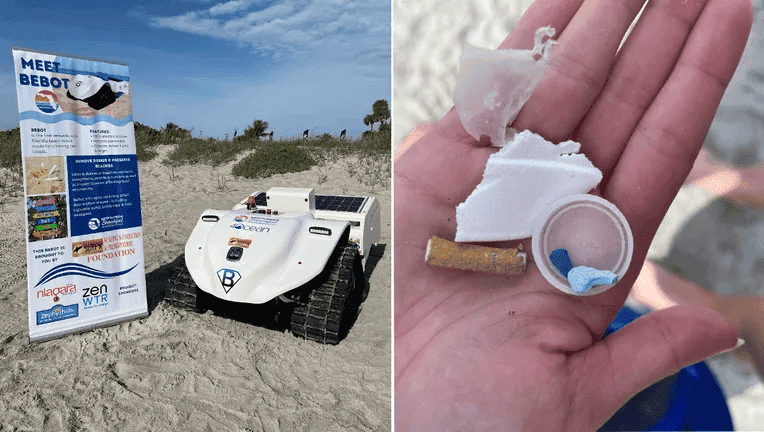 The nonprofit goes by the “Keep Florida Beautiful” moniker. The new move is the result of a donation made by the group Surfing’s Evolution and Preservation Foundation. The robot can help the environment by tirelessly cleaning the beaches removing the trash. There are several advantages of using a robot for this task. Especially, for a nonprofit company that has its resources acquired through donations and uses volunteers.

“The robot will go over soft dry sand and sifts the very top layers of sand. It removes the very small pieces of debris. The manual cleanups tend to miss these small pieces”. Savanna Christy, executive director of Keep Florida Beautiful, has told to WKMG-TV.

Furthermore, Christy states that the robot still needs some advancements and development. For instance, it is not yet sensitive enough to clear microplastics, which measure 5 millimeters and smaller. However, it can sift out anything larger than a squared centimeter.

“It does pick up plastic fragments, bottle caps, cigarette butts, plastic straws, food wrappers. It’s picking it up and sifting it out of the sand”

Worth noting that Keep Florida Beautiful is officially the first nonprofit in the United States to use remote-controlled robots for beach cleaning.

To those unaware, the BeBot is a solar-powered, remote-controlled robot. It can collect items such as cigarette butts, bottle caps, food wraps, and other plastic fragments. The machine is silent, relatively light, and does not sift sand deep enough to harm the natural environment. The unit made its debut in Cocoa Beach and will travel around the state to help other Keep Florida Beautiful coastal affiliates.

Christy states that BeBot won’t replace the efforts of the thousands of volunteers who help to keep the beaches clean. It’s interesting to see how Florida is one of the leading states when it comes to technology adoption. We are curious to see how technology will keep advancing to help humanity in the future. As far as Elon Musk is concerned, he may be looking for the answer to immortality.

It’s not a surprise to see Florida being one of the first states to embrace technology. After all, the state is the house of cape Canaveral and also one of SpaceX’s strongholds.

Previous Feature-rich yet affordable Cubot P50 goes on sale for $99.99

Next Godeal24 gives you the lowest prices for Windows and Office! Windows starts at $6.22!