The research company IC Insights published a report in which it analyzed the shares of countries and regions in the semiconductor market. More than half of the market is occupied by companies from the United States; while China managed to win a share of only 4%. It is important to note here that we are not talking about where the chips are made; but in which countries the semiconductor companies are located.

The share of the leading US in the ranking is 54%, followed by South Korea with 22%, Taiwan with 9%, Europe with 6%, as well as Japan. The company’s analysts calculated these figures taking into account IDM companies involved in both the development and production of chips; as well as brands that do not have their own production facilities. The US figures were strong in both categories, while South Korea, Japan and Europe rely heavily on manufacturing. According to IC Insights experts, the situation will not change radically in the coming years, given the significant subsidies that the US authorities allocate to the industry, reflecting its high importance. 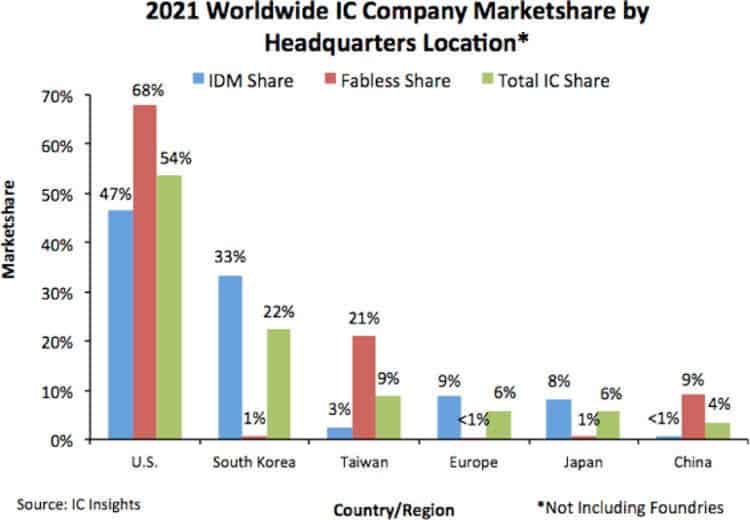 China’s disappointing results clearly point to a lack of manufacturing capacity among local companies; but Beijing’s push for self-sufficiency in microelectronics is unabated. By 2025, the Chinese authorities were going to provide up to 70% of the country’s needs on their own; but due to US sanctions, as of February 2021, this figure was only brought up to 5.9%. The program should be fully complete by 2035.

Forrester analysts are confident that the most important deterrent for Chinese manufacturers right now is Beijing’s overly strict policy on outbreaks of COVID-19; because of it, multibillion-dollar state investments in the industry have not yet yielded the desired results. 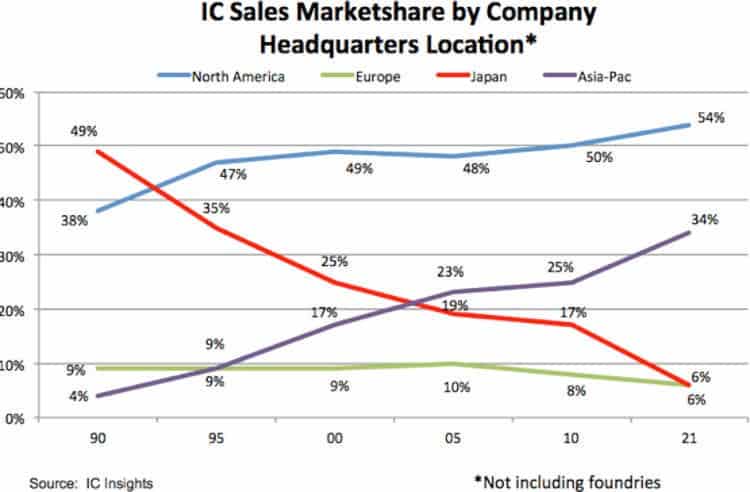 IC Insights also analyzed the dynamics of indicators over the past 31 years. Companies from North America and the Asia-Pacific region showed the greatest growth, while figures for Japan decreased significantly. In the 90s, the latter owned 49% of the market.

In contrast to the Japanese and European companies’ IC marketshare slide over the past three decades, the U.S. and Asian IC suppliers have seen their shares climb since 1990.  As shown in Figure 2, the Asian companies have witnessed their share of the worldwide IC market surge from a miniscule 4% in 1990 to 34% in 2021.  This increase in share by the Asian IC suppliers equates to a 31-year IC sales CAGR of 15.9%; almost double the total IC market CAGR of 8.2% over this same timeperiod.