POCO started the POCO M4 series last year in a very unusual form. The company kicked off the lineup with the highest possible option – A POCO M4 Pro 5G bringing the Dimensity 810 SoC and a 50 MP camera combo. Several months have passed, and the company has introduced the POCO M4 4G which happens to be a rebranded Redmi Note 10S with a few tweaks. One can think that the brand is done with the lineup, but here comes the POCO M4 5G. It’s not the first time we hear about the device, but now, it seems to be getting very close to a release. The device had its possible design revealed as well as some of its key specs. These specs are very familiar for those who have been following the latest releases in the budget 5G spectrum.

Honestly, we have to say that the POCO behind phones like the Pocophone F1 and POCO X3 series is officially dead. Nowadays, the brand basically serves to rebrand existing Xiaomi smartphones. Of course, it has been trying to expand its name across other segments with the recently released – POCO Watch. However, it seems that most of the smartphones coming from POCO will be based on existing Redmi or Xiaomi devices, the POCO F4 GT isn’t an exception, and the POCO M4 5G probably won’t be. The POCO M4 5G will bring a MediaTek Dimensity 700 which is a major downgrade in comparison to the Pro model.

The Dimensity 700 isn’t a bad chipset, but honestly, it’s aging at this point. We’ve seen many releases with this chip in recent months, and companies are still reluctant to upgrade to the Dimensity 810. In addition to the chipset, the budget POCO M4 5G will bring a 6.58-inch LCD screen. It will have a Full HD+ resolution and a 90 Hz refresh rate. The touch sampling rate will also be decent at 240 Hz. The camera setup also picks the Pro formula with a secondary camera snapper. Unfortunately, there is a major downgrade here. 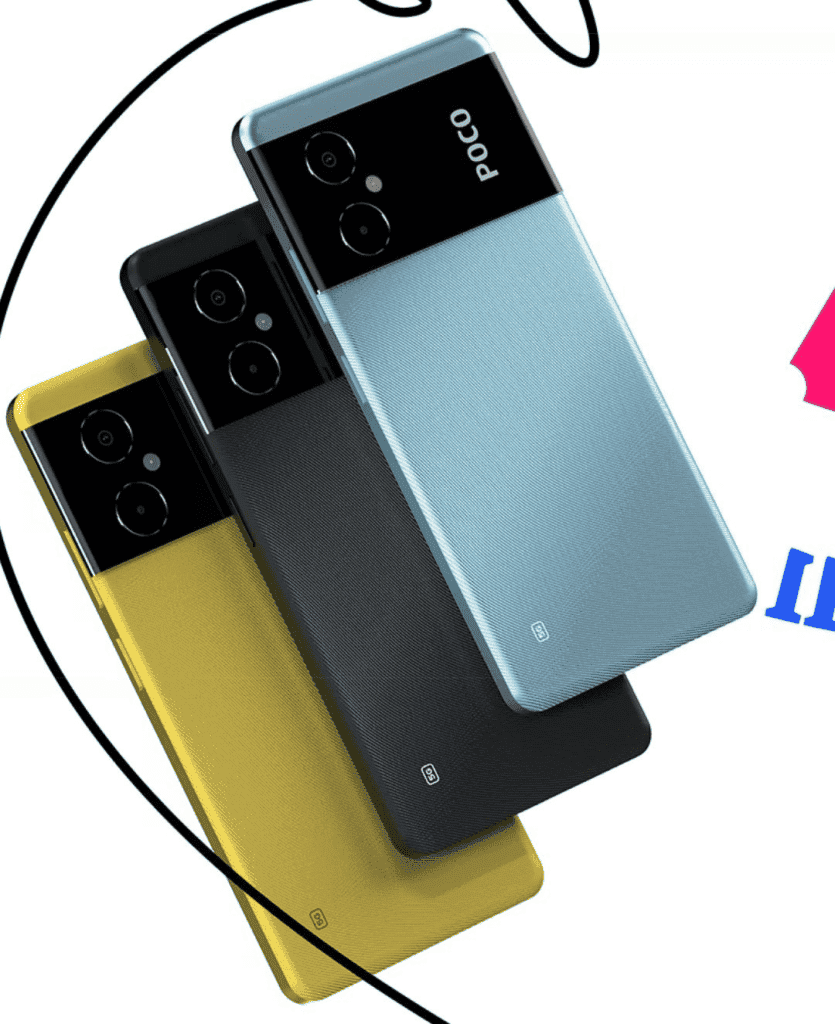 While the POCO M4 Pro 5G brings two useful snappers – a 50 MP main camera, and an 8 MP ultrawide – the POCO M4 5G will drop the ultrawide module. The budget model will keep the 50 MP main camera but will be accompanied by a 2 MP depth sensor. At this point, we’ll leave you to judge if the depth and macro sensors are really useful. The front-facing snapper is down to 8 MP resolution. The device has an IP52 rating which makes it splash resistant. Moreover, it weighs around 200 grams and brings the usual POCO camera island with a big black rectangle.

We expect the phone to bring a 5,000 mAh battery with at least 18 W fast-charging. Hopefully, it will be running Android 12 straight out of the box with MIUI 13. But don’t hold your breath for it, the device may end up running an Android 11 version.

The device will come in three colorways, and apparently, there will be a plastic-textured finish.