Strategy Analytics has published statistics on the world market of portable computers in the first quarter of this year. Notebook shipments are declining amid industry saturation and an ongoing shortage of electronic components.

Between January and March, inclusive, approximately 63.5 million laptops were sold running various operating systems. This is 7% less than the result for the first quarter of the previous year.

The largest market player is Lenovo with a 23% share. In second place is HP with a score of 20%, and Dell closes the top three with 16%. This is followed by Apple and Acer, which control 10% and 7% of the industry, respectively.

BOSTON–(BUSINESS WIRE)– The staying power of notebooks is strong a full two years into the COVID pandemic, even as offices are welcoming more people back to in-person work, according to a new report by Strategy Analytics. Lessons learned from the pandemic weigh heavily on consumer and commercial buying decisions and as hybrid work becomes the norm, the need for mobile productivity remains high. The flipside of fewer COVID restrictions around the world means that education budgets have turned away from IT expenditures, which created an unfavorable year-to-year comparison with total shipments declining -7% in Q1 2022. 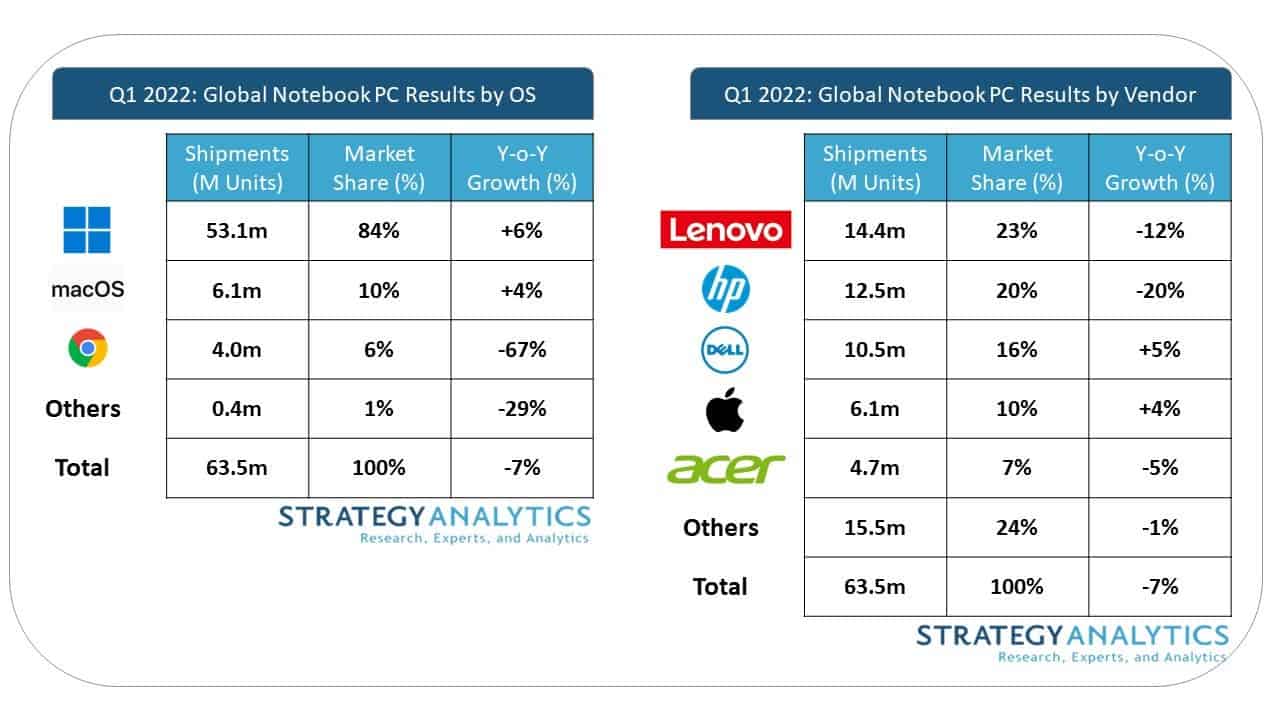 Also, the segment of portable computers running the Chrome OS operating system sank the most: here sales fell by 67% to 4.0 million units. The share of Chromebooks has fallen to a minimum in five years.

Chirag Upadhyay, Industry Analyst said, “ChromeOS shipments suffered as education demand continued to slow down; and consumer upgrades for Chromebook were at the lowest point, even compared to pre-pandemic levels. The Chromebook business is very small but remains very important for top vendors, as they are keeping good inventory before education demand kicks off in Q2 2022 in main markets. Chromebook is still making an impact in new markets albeit slowly as the public sector look to spend towards cheaper devices for education.”

During the first quarter, 53.1 million Windows laptops and 6.1 million macOS laptops were on sale. Growth in these segments was 6% and 4%, respectively.

Eric Smith, Director – Connected Computing added, “The total notebook market was only down 7% compared to last year; demand for commercial business stayed strong for Windows 11 PCs and MacBooks powered by M1 chipset; as most enterprise and SMB clients are still choosing hybrid work options and spending extra for quality products. Dell and Apple were good examples of the growth segments of the market. Premium Windows notebooks and MacBooks with the M1 chipset.”

Chromebooks can function as LTE or 5G hotspots soon