The Redmi Note 12 series has been released by Xiaomi, but the company is not done yet with the Redmi Note 11 series. The rumors about a mouthful-named Redmi Note 11 Pro (2023) have been floating around for a while. Now, more evidence is helping us to “mount” the device’s figure. The “2023” smartphone got certified by the Google Play Console with the Snapdragon 712. That generated some buzz, after all this is a really old chipset. Now, a Geekbench result is clearing things slightly.

The Snapdragon 732G is passed by Geekbench accompanied by 8 GB of RAM. The processor achieved 561 points in the Single Core tests and 1,798 in the Multi-Core department. The Snapdragon 732G is not bad at all, but perhaps, isn’t a chipset that everyone will praise in 2022, or in 2023 – yes, the phone’s name suggests it’s here for the 2023 market. If this sounds like a disappointment, we have to say it will get worse – the phone runs Android 11. 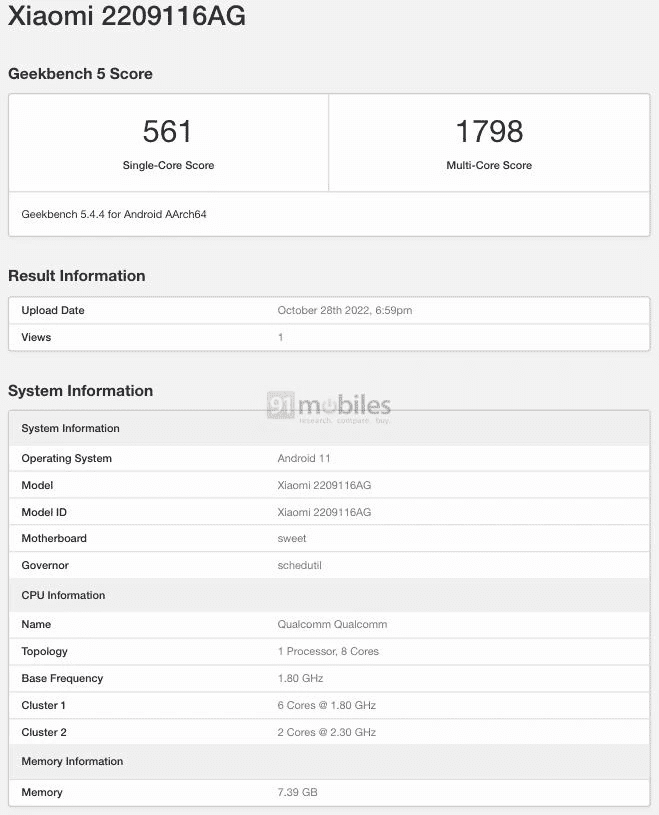 The listing suggests the unit that ran through Geekbench runs on Android 11. Maybe it will launch with Android 12, but history tells us otherwise. So Xiaomi will have to update it shortly after its launch. We don’t exactly when Xiaomi will launch the phone, but we expect it to happen soon. Regardless of the Android version, the device will arrive with MIUI 13.

As we’ve said above, this Redmi Note 11 Pro (2023) looks and performs like the Redmi Note 10 Pro. So we can only assume this is a re-release for the 2020 smartphone. The reason? It’s impossible to say, but that won’t be the first time. The company launched the Redmi Note 8 (2021) last year, and it was

Next Get creative for Halloween with Creality CR-Laser Falcon 10W