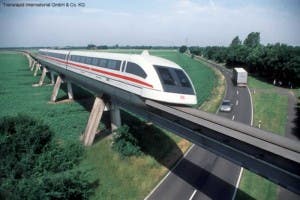 China’s locomotive jewel is the Maglev in Shanghai. A train that floats on magnets and can reach a cruising speed of around 500Km/h pretty darn fast in our standards, but obviously not fast enough.
Jiaotong University current have a prototype Maglev that can hit 600 Km/h and are planning a smaller ‘Express’ version which will hit the dizzying speed of 1000 Km/h!! Twice that of current Maglevs in China or Japan!
The people behind these super fast trains decided the only way to make them go any faster was to reduce friction, but as they already float on magnets there was little they could do to drop it further unless of course they put the whole train and its rails in a tube and created a vacuum……. So that’s what they’ve done!
The cost for the tube is said to be around 10-20 million RMB per kilometer!! And is penned in for testing within the next 2-3 years!

Next Another Foxconn Suicide!