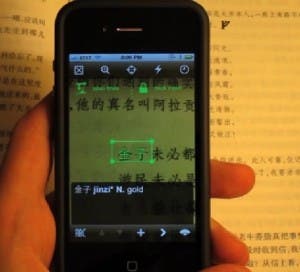 As a foreigner living in China I’ve often found myself in situation where I need/want to translate Chinese, but haven’t had the skill to do it. The reason is obviously my Chinese ability, which needs much improvement, but also partly due to the quality of Chinese-English iPhone apps. I have tried all of them and only 2-3 are any good, but even then it’s difficult to piece together a sentence.

If only I could just point my camera at the text I want to translate and the phone did all the hard work! Well looks like my prayers have been answered!

Pleco, the developers of easily the best iPhone/Windows mobile Chinese dictionary available (and free) have developed and add on named OCR (Optical Character Recognition). All you need to do is start the app and point the camera at the Chinese you want to translate. The phone ‘reads’ the characters and translates them! It all works pretty quickly too!

Other features include a drag around box on the camera screen so you can choose to translate just one character at a time all the whole sentence, a text dictionary (this is actually the main app and the OCR is a feature) and history of what you have translated.

The OCR system will be included with the Pleco 2.2 iPhone update, and an Android version is in the works too.

Check out a video of the system in action here it’s amazing!!

Previous Slice Your Sim With the Micro Sim Adapter

Next Motocrola and other Motorola Clones of the Week