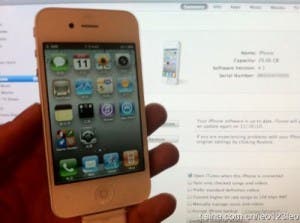 Update: the owner of the white iPhone in the video has posted this photo of his phone plugged in to iTunes. As you can see iTunes see’s it as a White iPhone 4 with software version 4.1! Looks like the proof we were after!

We’re not sure what to make of this video as white iPhone 4’s seem to have been canceled. The packaging picturing a white iPhone 4 could easily have been home made with the aid of Photo Shop, but we’re pretty certain the iPhone is a genuine Apple model running iOS 4. But has the owner has just replaced the black glass on a regular iPhone 4 to aftermarket white parts (which are available).

The details on the box state it’s an AT&T phone meaning it was meant for the states leading us further in to mystery! So what is it? Are iPhone 4’s being modified to look like the now canceled white iPhone 4? Are white iPhone 4’s currently in production? Is it a prototype?

Previous Nokia N8 Clone is as bad as the real thing! Only without the killer camera!