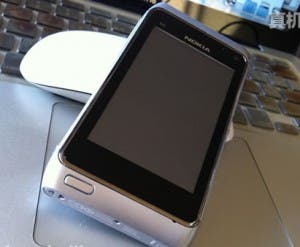 The problem with being a clone maker is knowing what to clone and what changes you should make. If for example your cloning a phone with a bad software why not stick on Android as its free? If you clone a phone with low resolution screen why not stick on an LED flash as compensation?
But when you clone a phone that’s only redeeming feature is its excellent camera, why take it away, then give it a poor O.S, and very little connectivity?

The N8 has some rather swanky features, a stylish body, huge touch interface and even ‘the best camera ever found on a smartphone’! Nokia even gave a couple of N8’s to Hollywood directors to have them shoot a short action movie, which even had a cameo appearance from Pamela Anderson!
But due to a spell of bad revues and Nokia’s insistence to stick with the Symbian operation system, not even Pammy was able to excite sales! If only it had been loaded with Android! or Web O.S even!!
So to make a clone of a phone which isn’t really in demand then take away its best feature, the awesome camera, and replace it with something… that’s.. well… average, does seem a bit odd.

This N8 clone manufactured by Hua Hin Telecom has a 3.5 inch touch screen with orientation sensors which switch the screen from portrait to landscape in a rather snappy, if unpolished manner.
Media playback is well supported with RMVB, RM, AVI, 3GP and MP4 codecs working without conversion. There is also a HDMI out for larger screens.
And that’s about it! There is no mention of WIFI in the blurb, no GPS, no 3G and the JAVA based O.S isn’t going to have many killer apps.
For the 1280 Yuan asking price you could pick up a much better iPhone clone running Android 2.1 with WIFI, GPS and 3G!!
You could even get a genuine Samsung Android phone for roughly the same!