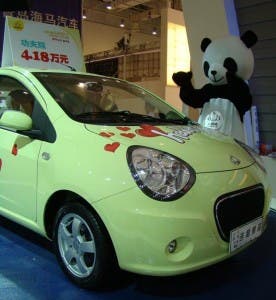 Geely the Chinese automotive company, that made international headlines this year when it took over Volvo, began selling it’s popular Panda city car online this Monday.
Geely is now only selling the Gleagle branded Panda online with prices starting at as little as 34,800 Yuan ($5,200) but plans to sell other models in the future along with auto accessories.
“The internet, if well used, would bring a rather big surprise to Chinese automakers,” siad Liu Jinliang, vice president of Geely.
For more Chinese automotive news head over to Chinacartimes.com.