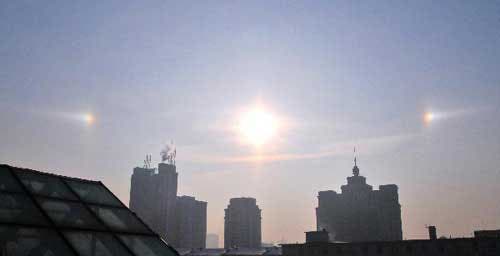 Two small suns were pictured over the skies of North East Jilin Province yesterday (January 14th). Although the image just looks like sun glare on the camera lens this is in fact a very real atmospheric phenomenon.
But what is a ‘Sun Dog’? find out after the jump.

A Sun Dog (Sundog) is officially known as a parhelion, originating from the Greek parelion meaning “beside the sun” is an atmospheric phenomenon which can be seen either to the left or right of the sun (or in this case both) when the correct conditions are present. 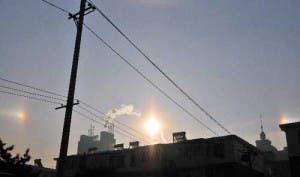 Sun dogs are formed by plate-shaped hexagonal ice crystals in high and cold cirrus clouds or, during very cold weather. Ice crystal also known as diamond dust drift thought the air at low levels, these crystals bend the light passing thorough them creating either a second (or third) mock sun to the left or right or on occasions both.
These mock suns are the Sun Dogs we can see in the pictures here.

Next Confirmed: Meizu M9 To Get Android 2.3