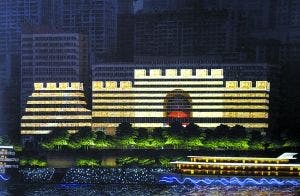 Chongqing was once surrounded by 17 great gates which were built during the Song and Ming dynasties, however due to various reasons all but 2 of the ancient gate still exist.

To rectify this great injustice to 700 years of history Chongqing city government have teamed up with some budding designers from Tsinghua University the result is a plan to rebuild the 17 gates digitally using 500 million Yuan worth of LED lights!
The first 3 LED light gates which will represent the historic gates; Dongshui, Taiping and Hongya Gates are set to be completed and unveiled by July 1st this year.

Next Samsung Galaxy 10 Gives Inspiration To Another Knock-off Tablet