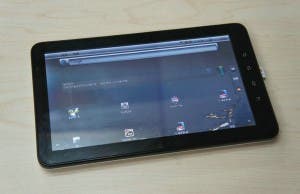 Samsung may well be a little disappointed with its latest 10 inch Android tablet, the Galaxy 10, but that hasn’t stopped a clone of it popping up in super fast time!
The 10inch capacitive screened unit (also available in a resistive screened version) gets the standard Android tablet treatment, in that it get’s Android 2.2 instead of 3.0 and that the CPU is an older generation single core unit running at 800 mhz rather than a super snappy next gen dual core unit, but there are a few standout features.

The battery is very impressive 7200mAh unit which should last at least 6 hours, then there’s the rather generous 512mb RAM, and built in 4Gb of NAND flash storage along with a built in SD card reader.


The 10” Samsung knock off also gets built in 3G and a front facing camera, all of which is wrapped in a black and white plastic shell and weighs in at a respectable 680 grams.

No word on pricing yet but expect to pay around 1500 Yuan when it is finally put in to production.

Next Android 2.3 Spotted On Meizu M9 And Its Super Fast!