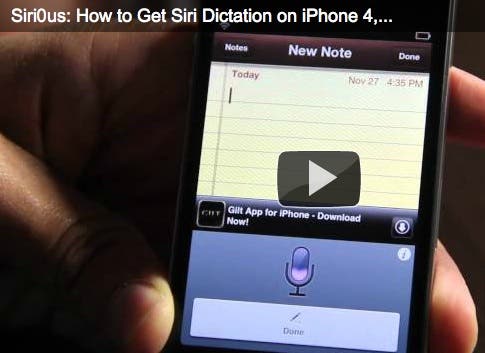 Getting Siri to work on our current iPhone 4’s, iPhone 3GS’s and iPod (4th generation) is currently the aim of every iOS developer on the planet! While we have seen some promising videos people running Siri on iPhone 4’s and iPod’s and have even featured a how to, to add the Siri user interface, we have yet to see a real Siri on iPhone 4 hack for all.

Well today we are one step closer to get Siri on our older iOS hardware thanks to iOS developer Eric Day, who has successfully created a Cydia app which will enable Siri dictation on your iPhone 4, iPhone 3GS and iPod Touch 4.

Unlike other claimed Siri hacks, Eric has actually created a Cydia hack named Siri0us, which you can install now to get Siri dictation running on your iOS device.

What is Siri dictation

If you are reading the above and hoping you will be able to ask Siri to marry you after installing Siri0us don’t get your hopes up as this dictation hack won’t enable the personal assisstant feature. What Siri0us does enable is text to speech in certain native iOS applications such as Notes and the Message app.

Watch Siri0us in action on an iPhone 4

How to install Siri Dictation on iPhone 4, iPhone 3GS and iPod

Follow these very simple installation instructions to get Siri dictation on your current iOS device.

Now when your keyboard is on screen you will see a microphone icon, choosing this will start Siri dictation on your iPhone 4.

Warning:
The developer has noted a bug that some may run into when trying to install. If your iDevice keeps respringing, do not restore! Use a SSH tool to remove the /System/Library/PrivateFrameworks/AssistantServices.framework file.